“It’s horses all the way down,” said Smelgor, sitting on a log.

Smelgor had got a new religion. It was a horse cult. They believed that everything was made of horses. A tree was made of tiny horses. Those tiny horses were made of even tinier horses. The only exceptions were actual horses. They were one indivisible thing.

“But see here,” said Stevenson, sitting beside Smelgor with a fern in his cap. “What if I take my axe and chop the horse in two?”

“You can chop it in two a hundred times,” said Smelgor. “But you will not divide its horseness.” Stevenson had to think about that. He had grown up on a hog farm. His father never owned a horse. Instead, Stevenson spent his days splattered with pig shit. Even when he washed it off at the well, the other kids all recoiled from him at school.

“Pigs too?” Stevenson said, wrinkling up his nose. “You telling me pigs is made of horses?”

Stevenson got up and went to the edge of the woods. There was a grassy hill, leading down to a burbling brook. Cows stood by the brook. Further off, there sat a windmill beside a little stone cottage. An old woman stood outside the cottage. There was a rug hung out on a gate, and the woman was beating the rug. To think, Stevenson thought, a little thrill gone through him. She didn’t even know that everywhere, up her arms, through her heart, down her legs, a great stampede raced through her blood. 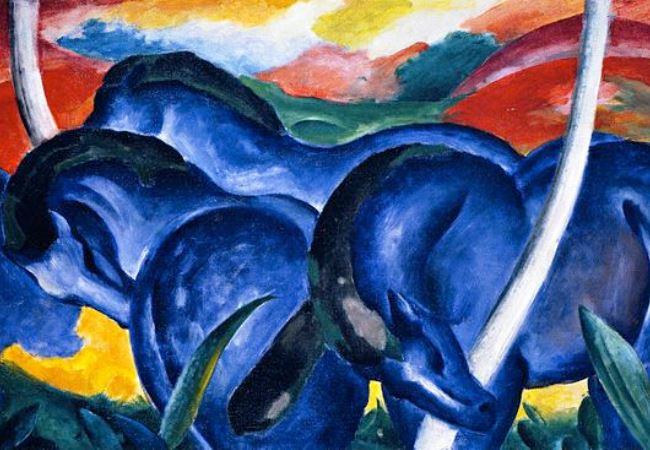 Geordie Williams Flantz is a writer living in Minneapolis, Minnesota. His fiction has appeared in Shadows & Tall Trees, G.U.D. Magazine, New Genre Magazine, and R.KV.R.Y Quarterly. Learn more about his work at geordiewilliamsflantz.tumblr.com.

(Previous story: Ocean Songs for the Nursery by Jane-Rebecca Cannarella)

Detail of painting by Franz Marc