I started each morning by standing in front of the full-length mirror in my bedroom and studying my wasted frame. I examined the jutting curve of my clavicle and tried to determine if it looked more sharply defined than it had the day before, if the shadows that outlined it were any darker. I eyed my withered biceps and made sure I could still wrap my hands all the way around them, my middle finger and thumb connecting underneath. I counted my ribs — four on the left and four on the right — articulate as the bars of a birdcage. My hunger was the bird, a trapped, feral thing, a whirl of feathers and fury that clawed at my insides day and night without let up. Ignoring the creature, its violence, its relentless need, was my greatest strength. It was the one thing I could do better than anyone else. I knew plenty of people who were more accomplished than me, kinder than me, more talented and attractive. But nobody could ignore suffering like I could.

On the days when I suffered the most, my body felt like the fuselage of an airplane that was going down, full of pressure and panic and roaring, rumbling terror. I anesthetized myself with sleep and black coffee and small doses of beautiful language — the proverbs of Blake, the ponderings of Dickinson. Excess of sorrow laughs. All wholesome food is caught without a net or a trap. Because I could not stop for Death — He kindly stopped for me. Carefully chosen words calmed me, steadied the irregular palpitations in my chest, lifted my mind out of the burning wreck of my body. Food would have helped, of course, but there was no food to be had. I made sure of that. The cupboards were bare. The refrigerator was empty.

At night I still dreamed of food. My subconscious evaded discipline. In one dream I discovered a jar of peanut butter in the cutlery drawer and devoured the contents in one ravenous sitting. In another I found a box of Girl Scout cookies in my mailbox, tore it open, and demolished two sleeves of Thin Mints right there in my vestibule. I awoke from these dreams slick with sweat, my concave belly quivering.

I weighed myself each day, and each day I weighed less. At a hundred and ten pounds, I stopped going to work. Standing at the counter, pouring coffee, making sandwiches was just too much for me. I didn’t have the energy for it anymore. I told my mother I’d been laid off, and she sent me money in the mail. At a hundred pounds, I lost interest in sex and stopped answering my phone. At ninety pounds, I stopped getting out of bed except to use the bathroom. I spent all day under my sheets, my arms wrapped around my knees. I imagined I was a baby in utero, cocooned, protected from the outside world, and I thought that maybe all dying was just returning to the beginning, just starting again. 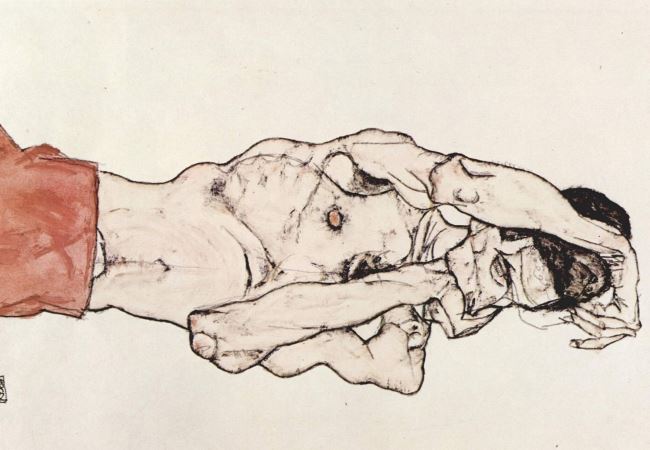 Jack Somers’ work has appeared in Midwestern Gothic, Prick of the Spindle, Litro, decomP, Flash Fiction Magazine, The Atticus Review, Fewer Than 500, Maudlin House, and Rum Punch. He lives in Cleveland with his wife and their three children. You can find him on Twitter @jsomers530 or visit him at http://www.jacksomerswriter.com.

(Next story: Spark and Flink by Ben Slotky)

Detail of image by Egon Schiele