I received the loveliest dick pic from Larry. It made my week, which was not going well because I was returning to work after a brief medical leave. My cubicle is in the corner of a back office, and no one seemed to realize I’d been gone, let alone that I’d returned — except Larry. Robust and high-res, his dick pic reminded me of a hike my therapist recommended I take to the top of Cascade Mountain. Straight up, no switchbacks. Tree trunks thick as, well, this dick. The photo was taken from above, angled so the light hit it to resplendent effect. My mom kept sending me get well cards with sunshine pouring through clouds that seemed so manufactured. So phony. But Larry’s loins just rang true, you know?

He must have used a tripod and timer. Or maybe he hired a professional dick pic artist. Either way, I appreciated that he went the extra mile for me during this difficult time, especially since we barely knew each other. It helped me sleep at night. Larry and I worked at the same think tank on reproductive rights. He was a big deal in the development office, and I was assistant to the assistant legal counsel. Neither of us knew the nitty gritty of reproductive rights. He was just really good at raising money, and I was so-so at Word, Excel, and Power Point.

I’d been going back and forth about how best to thank Larry — sincere handwritten note, baked goods, Amazon giftcard — when I ran into him in the hallway. Normally I never know what to say, but his dick pic made me feel so close to him that words tumbled out. “I love how you used a black and white filter. Sepia made your dick seem timeless. Archetypal.” I spread my hands above my head like I was miming a movie title. “The dick of our time.”

One side of Larry’s mouth smiled and the other frowned. I wondered if I’d said the wrong thing. My mom always said not to worry, no worries, I love you just the way you are honey-bun except I wish you weren’t sad every single day. But I did worry. Had I made him uncomfortable? That was not my intention. Not at all.

I asked my therapist about it at our first session since my medical leave, and she might have used the word creep. She definitely suggested getting rid of the picture and focusing more on my own journey. I tried, but I couldn’t bring myself to delete Larry’s dick. It was so big and so hard, which was more motivational than any of the motivational speakers my mom took me to. I wouldn’t go for a small penis in a dick pic. Just not my taste. I wasn’t prejudiced; I didn’t look down on small penises. I thought small cocks deserved equal rights. And reproductive rights. Wait, maybe those just applied to women. I’d have to ask the assistant legal counsel. Plus, wow, Larry’s pubic hair. It was lush. Talk about motivational.

The more I studied this cock, the more it helped me get back in touch with myself. For months, nothing had interested me. I had trouble remembering to eat or make photocopies for the assistant legal counsel. Even if I remembered, it was hard to make myself do it. Now I felt game to photocopy anything. The dick was the first thing in ages that engaged the real me. I was even playing my childhood instrument again. The tuba. I didn’t know why, but Larry’s picture made me want to blow stuff. The tuba was so much more satisfying now than it was in seventh grade before I understood, I mean really understood, how to play. I could make first chair now because of that dick pic.

I wanted to tell Larry how much he’d helped me, so I lingered around the staff kitchen, trying to run into him casually. Eventually I caught him warming a burrito. He didn’t seem interested in the tuba, so I asked if there was anything he wanted me to do with his picture, any special instructions.

Larry had burrito in his mouth, so he couldn’t reply.

“Was that what you were going for?” I asked. “You put in so much effort, I want to make it meaningful. I’m not sure these orgasms and the tuba are meaningful enough. What do you think?”

The burrito was inconsistently heated; everyone complained that the microwave in the kitchen was practically pre-Roe v. Wade. So Larry burned the roof of his mouth and “had to dash.”

No worries. I’d figure out what to do with the picture myself. That afternoon I framed it with holly and pine cones covered in glitter and put it in my cubicle. If Larry’s penis could help with tuba and orgasms, maybe it could get me in the holiday spirit, inspire me to reach out to old friends like my therapist suggested. The assistant legal counsel asked me not to keep Larry’s festive dick in a conspicuous spot. I told her it was just a holiday decoration like her photos of cats in Santa hats. The assistant legal counsel didn’t see it that way. There were conversations with HR, and Larry moved to the think tank two flights down. They think about farm policy.

After the holidays passed without my getting into the spirit with old friends (there aren’t really any old friends), Larry finally replied to my emails. “Love the new job, soybean commodities are where it’s at.” I knew he was lying; reproductive rights were way more his thing. I could tell from the new dick pic he sent, which was washed out. Flaccid. When I asked him to send another, so I’d know his dick was okay, he told me to stop emailing, it was getting awkward. Maybe I should have shared that I was having trouble making photocopies again, that I kept forgetting things. Like the security code on the think tank door. “1973…1973…,” I reminded my clumsy brain when I couldn’t sleep. But instead of confiding in Larry, I forced myself to play the tuba one last time. I texted him the recording since he’d told me not to email. 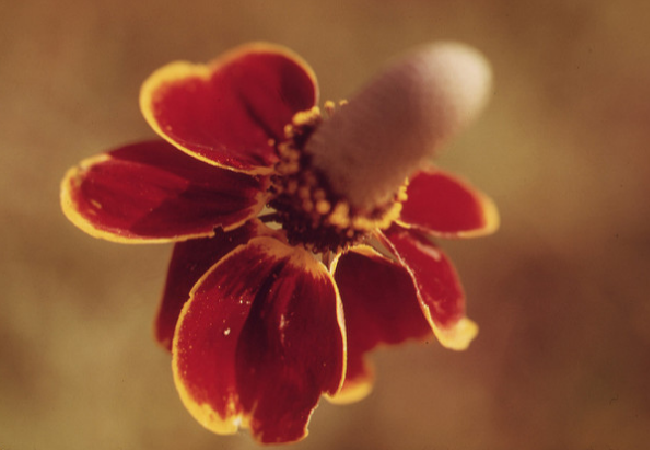 Maureen Langloss is a lawyer-turned-writer living in New York City. She serves as the Flash Fiction Editor at Split Lip Magazine. Her writing has appeared in Gulf Coast, Little Fiction, Sonora Review, The Journal, Wigleaf, and elsewhere. Her work has been nominated for a Pushcart Prize, Best Small Fictions, and Best of the Net. Find her online at maureenlangloss.com or on Twitter @maureenlangloss.

(Next: Older Women by Caroline Kim)

(Previous: How to Shoot Somebody Who Outdrew You by Johanna Dong)