Jacob is ready to have a girlfriend and he’s pretty certain that Tina is keen. He’s noticed her noticing him in the cafeteria at breakfast, but whenever he tries for eye contact she turns away and pretends to be really interested in something else such as the label on her yoghurt pot. Jacob has read about this kind of behaviour, it is a type of flirting that women do and it is known as ‘being coy’. This has made Jacob think that Tina likes him. This has made Jacob think it would be a good idea to join her for breakfast one day. That day is today.

Jacob also believes Tina has been running scenes through her mind, scenes where he makes the first move by saying something like, ‘Hi, Tina? Aren’t we on the same course?’ and Tina will say, ‘Oh, hi – yeah, that’s right. Jacob, isn’t it?’ And this will begin their interaction, an easy one dotted with the right amount of nervousness (on her part) and with some blushing and nervousness (also on her part – Jacob will be as cool as a cucumber).

Jacob enters the canteen and sees Tina there, alone, on the long trestle table. He struts his way over to the serving area. If his strut had a sound effect each step would sound like Danny Zuko saying ‘huh’. Huh, huh, huh. At the refrigerator he does a 360-degree spin of the cafeteria to make sure Tina has seen him. She has: he knows this because she is pretending to be interested in her yoghurt pot.

He selects his breakfast (toast, banana, energy drink) and presents his university catering card to the cashier like a bored police officer. He just knows Tina will be watching by now. He feels so buzzy.

Next stage. He leisurely walks to the eating area. He approaches Tina’s table. He casually but confidently puts his tray down. He straddles the bench, a leg either side, then swings both legs round so he is facing her.

He waits for her to say her part, the Oh, hi – yeah, that’s right. Jacob, isn’t it? so he can do what he planned next, which is smile – just a half-smile because that will be cool and mysterious – then he’ll bite into a piece of toast and eat it while still smiling.

But Tina doesn’t say anything.

But she is between spoonfuls of cereal.

Her mouth is closed and she’s feeling along her front teeth with her tongue. Weird. Ah – he thinks – she’s worried about errant bits of cereal. Jacob looks in her bowl. Looks bran-y. Yeah, bran gets in your teeth. He feels bad for her because cereal is probably the worst thing to eat in close proximity of someone you have designs on. Maybe he should do this again on a day when she’s eating something more dignified.

Tina stops with the tooth-tongue examination but just stares at him, all blank. He tries again. ‘Tina? We’re on the same course. Fridays with McQuinn?’

She keeps on with the staring.

Jacob isn’t sure what to do so he smiles and picks up the banana from his tray and peels it.

Tina spoons an unusually large spoonful of cereal into her mouth. She keeps her mouth closed while she chews, which is nice of her, but between mouthfuls she makes a big deal of opening her mouth as wide as she can so he can see her milky tongue.

Jacob had no idea Tina would have this kind of attitude.

He takes a bite of his banana and chews it self-consciously. He’d thought the banana would give him an edge, represent a bit of bravado, but it’s probably the worst thing to eat when you’re already quite unnerved.

Tina lifts her cereal bowl to her mouth and drinks the milk, watching him for as long as possible until just her right eye is peering round the edge. Then she puts the bowl down and uses her thumb to dab at the corners of her mouth. She sits back. Ignores the yoghurt.

Jacob has most of his banana and all of his toast left. The only thing he can do is keep eating. Tina keeps watching.

When he’s on the last half of the last piece of toast he hesitates. He’s not sure what will happen when he’s finished. She has some kind of power watching him eat like this. He feels used. He puts the toast down.

Tina raises an eyebrow at him.

He can’t do the one eyebrow thing so he raises both at her.

She folds her arms.

He folds his arms.

She narrows her eyes.

He does the same.

They stay like this for a moment until Tina unfolds her arms and sighs.

Jacob unfolds his arms and sighs.

Tina gets up from the bench.

‘Tomorrow,’ she tells him, and walks away.

He watches her go, his face and heart on fire. 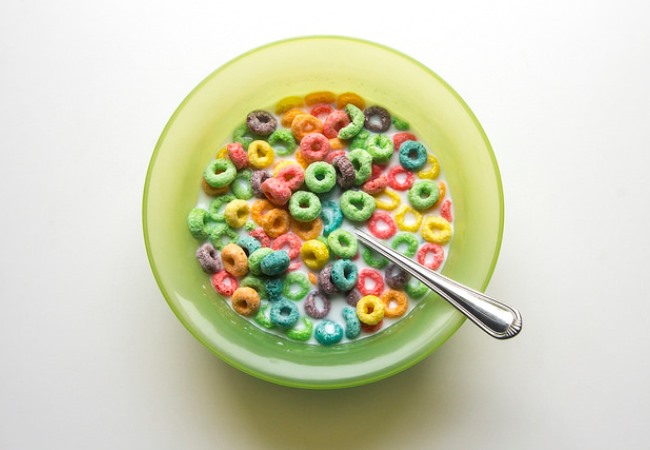 Teresa Stenson lives in York, England, where she balances her day job as a ghostwriter with her own creative pursuits. Her short stories have been published by The Bridport Prize, The Guardian Summer Reads, Fairlight Books, Litro, Popshot Magazine and Matchbook Lit Mag, amongst other places. Teresa is working on a collection of linked stories in which Tina is a regular feature. She sporadically shares extracts of her teenage diaries here: (https://tinyurl.com/y9ed9oq4) and can be found on Twitter @TeresaStenson.

(Next: The Ghost Story by Wesley O. Cohen)