It was not a snub. The therapy cat he brought on our second date, sitting like a bodyguard on his lap at Zito’s Pasteria. Me showing sufficient cleavage, he with his therapy cat, called Uma Thurman.

This was useful, he said, for all of us.

I agreed. However, I hadn’t known (I explained) that there was such a creature. I knew about therapy dogs of course. But not cats.

“Oh yes”, he said, with his thick, boyish hair. “They’re growing in acceptance.”

The cat was white and very round. I found myself feeling a bit less than romantic, leaning forward and attempting to be even the tiniest bit showy. She owned his lap. Her back arched, but so did mine. She was probably fixed. So was I.

He said the goodness of a therapy animal ripples. I agreed. I used to have a husband. In a way, he was my therapy animal, until we stopped being good for one another. Good for the soul is good for everyone, of course.

We had ordered crab, and the cat looked angry. In spy movies, cats are diabolical animals, as cold and murderous as their owners. This was never true. “This is my second date in the last thirty-five years,” he said. I nodded. It was my fifteenth date since my divorce, a date that was obviously going nowhere. He had lost his wife. She died. He said they never really dated, he and his wife. “Nah. We just hit it off, and that was that,” he said.

“So listen. Let’s not look at this as a date at all,” I suggested. He looked at me as if to say something, then readjusted the way the cat was sitting on his lap. “Yes, well, there is a lot of bacon in the world. It all smells great but then you find out what it does to your heart,” he said.

It seemed unfair, how cute this man was. Red and gold hair, not quite smiling. I imagined how frisky a man like this could be without all of the scar tissue.

“May I pet Uma?” I asked. I knew that I’d never see him again, and there was always something soothing about petting an animal. 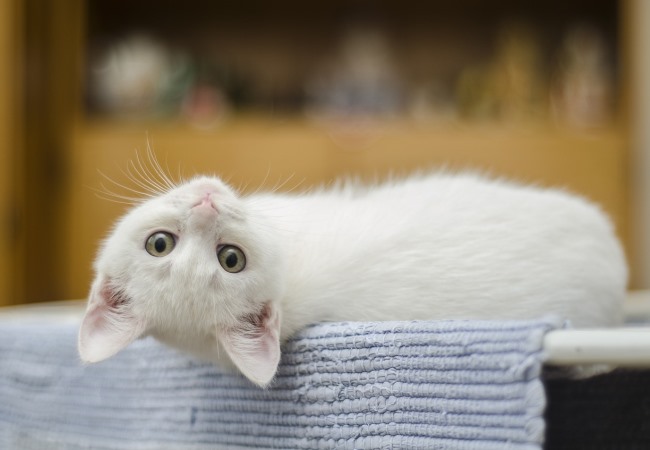 Meg Pokrass, a U.K. based writer, is the author of “Damn Sure Right” (Press 53, 2011) “My Very End of the Universe, Five Mini-Novellas-in-Flash and a Study of the Form” (Rose Metal Press, 2014) and “The Dog Looks Happy Upside Down” (Etruscan Press, 2016). Her stories have appeared in more than 200 literary magazines and anthologies, including Flash Fiction International (W.W. Norton).

(Next story: Galileo’s Other Job by Roger Meachem)