The tv screens are always on. Each screen shows a static image of a rented room. Each room is in a house owned by a Mr. and Mrs. Krummholz. The room with the screens has nothing else in it but two ratty recliners. The room with the screens is a conjugal secret. Now there’s only one screen with any action. Mrs. Krummholz is busy with knitting needles while Mr. Krummholz watches and narrates the action for her, in the way one might describe the plot of a gritty British thriller to someone out of eyeshot.

There are three men, two of them standing up. The third man in a chair. One of the standing men is behind him, holding him down by the shoulders. The other man is in a suit and he’s standing in front of the man in the chair. There’s something in the hand of the man in the suit. I can’t make it out. I’m gonna zoom. I’m zooming. It looks like it’s the lid to a coffee cup, thick white plastic one, the kind the nicer cafes offer. I’m zooming back out. The man behind the chair has opened the mouth of the man in the chair and pulls out the man’s tongue, methodically kind of, in a veterinary way. The man in the chair struggles but the man behind him smacks him with the tongue-free hand. Amazing the dexterity. The tongue is still out and the man in the suit is cracking the lid in half and he’s slicing into the tongue with the broken lid, over and over, eight or nine times looks like. Look at that.

Mrs. Krummholz looks up and says, I don’t have to look. I’ve seen it. They do this every day.

She’s displeased with the method of torture and the overall programming. If there’s any cat stranglers, let me know. That I’ll watch. I never miss a cat strangling.

You missed the one with the Germans in the balcony room.

Mrs. Krummholz tuts twice and says, I was at a checkup.

Mr. and Mrs. Krummholz have been doing this for years. They’ve let some rooms of their home and equipped the rooms with small cameras and then watch what happens in each room. It’s just something to do between meals and trips to the bathroom.

What is that anyway.

Mrs. Krummholz sets the needles on her lap and gives her husband a look of childish pride.

It’s a capelet for a cat.

We don’t have a cat. What’s a capelet.

Of course we don’t have a cat. This is for the next strangling. I want it to be special.

Yes. When they check in, and they always have a carrier, whoever they are, I’ll give them this capelet and say, Won’t this be a darling fit on the cutie, I just made it myself. Anyway I’m almost finished.

The man in the chair writhes and looks like he’s groaning, he must be, but Mr. and Mrs. Krummholz don’t have audio. Sometimes after a drink Mr. Krummholz will throw his voice and do some improvised voiceovers, much to the delight of Mrs. Krummholz. This is one of the enduring routines of their marriage. They’re both quiet now, though, as on screen the standing men fidget and look at their phones. Mr. Krummholz zooms in on the mangled tongue and nods educationally. He says, A capelet for a cat. 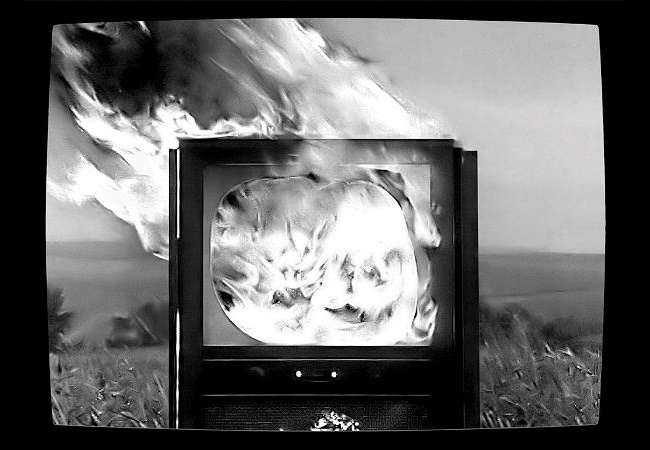 Derick Dupre’s stories have appeared in publications including Hobart, Spork, and Sleepingfish. “Mr. and Mrs. Krummholz” is an excerpt from a larger work-in-progress.

(Next story: The Night We Drove Old Terry Down by Nick Black)

Want to submit to our special “Kill People” issue?