They found each other online in a forum for photographers. They exchanged tips at first, with the rest. She clicked on his profile picture again and again. Dark, curly hair, big chestnuts for eyes, black wool sweater. He sat in a crowded café; his smile amid the chaos seemed to say, Ignore all this. I want to listen to what you have to say.

They sent private messages to each other. Little notes about technique and light. What to cut out.

He sent her a photo of a cloud, billowy and bright.

“It’s a pillow where I long to lay my head,” she wrote.

She shared secrets with him that her husband didn’t know, like how she used to sit for hours in the forest to escape her drunken parents.

He told her when he was eight, he locked himself in his room for two days after his mother died in a car crash.

She wanted to see her life as a stranger would. She sent him a photo of her street lined with palm trees and pueblo houses, the sky a painful blue. She left out her house, with the scooter in the front yard. He asked her to take a close-up of a palm tree. “I want to see the bark,” he wrote.

She spent hours cropping until the tree looked like fish scales with hair.

“You win all prizes.”

He sent her a photo of his skinny cobblestone road. The lampposts glowed like dreams.

Hours later, he emailed her an image of a golden coin on cobblestone. There was the faintest trace of his finger, in the top corner. Like a flash of flesh underneath so many skirts.

At night, after her husband fell asleep, she searched for him online. Was he married? Did he work? She didn’t know French, had never been to France. She had only a name and a photo. Jacques Beaulieu.

He was nowhere to be found.

To not know everything — to be known by a sliver — exhilarated her. He didn’t know the gross realities of failed to-do lists, oatmeal spilling onto the floor, budgets and dusty curtains, polite conversations with mothers.

The next photo he sent was in a café; his hand rested on a coffee cup that read “Bistro en Ville”, an empty chair in front of him.

She read it as an invitation, a line crossed. She imagined sitting there with him — when she was in the shower, on the train to work, in meetings, when draining the spaghetti, in bed.

She sent him a photo from her kitchen, in low light, with her legs the only sign of her body. A patch of skin.

When he didn’t respond, she wondered if she’d assumed too much. She hadn’t considered that he could stop sending her photos, and this could all end undramatically. But then she opened her email to find an image of his hand. She showed him hers. He sent an arm, a leg, a chin; she sent an eye, a knee, a thigh. A close-up of an eyelash. No mouth. No sex.

She asked her therapist if she should meet him. But her therapist wanted to speak about her parents locking her out in the rain one afternoon years ago.

She stopped seeing the therapist. She read the story about humans once having four arms, four legs, one head, two faces. How Zeus was so afraid of the power of the body that he split it in two, so that everyone was always looking for their other half.

Her husband took her on a trip to the mountains and bought expensive wine. When they had sex on the creaky bed, she closed her eyes and imagined his hands, his face. Back home, she told her husband she was going to a conference in Boston. She bought a roundtrip ticket and would stay in the Latin Quarter for three days. In three days, anything could happen. You could wreck your whole life. Or crack it so something bright could come in.

On a Tuesday morning, she sent Jacques a photo of herself in front of the Place Monge Metro, with only half her face showing. Her whole body shook with fear and pleasure.

She sat by the open window and ordered a coffee. The sky was lead gray; green leaves on trees across the street shook and trembled in the wind. A hot breeze warmed her skin; inside the air was heavy and damp.

She wasn’t sure how she would present to him. Would she be light or smoldering? Would he notice the roots in her hair? Would she be ordinary?

The park across the street filled with people at noon. Her stomach gnawed but she didn’t dare be caught mid-bite. The sun broke through the clouds.

A tall man with black curly hair and sunglasses walked in, looking left and right. She glanced at the empty chair and sat up straight.

He sat down and took off his sunglasses. He smelled of cigarettes, cologne, sweat. His hair was black with brittle strands of gray; his legs longer than she’d imagined. His knee touched hers.

“Claire, you are here!” A thousand wrinkles splintered around his eyes. He grabbed her hands.

She looked out the window. Heavy clouds blocked the sun. The air was still.

“This was a mistake,” she said.

“But we are together. Do not take your hands away. It was you who invited me to sit here with you. I have come; I am here.”

She turned to face him. “I don’t even know you.”

Jacques opened his arms and laughed. “Did you come all the way from Florida for this? To not talk to me then?” His eyes searched for her.

Her voice trembled. “Not like this,” she said. “Let’s walk first. I’m hungry and I want to take pictures and I can’t take you in all at once.”

“We have already begun our story,” he whispered.

As they wandered out to a darkening sky, she heard an echo of thunder from some far-off town. 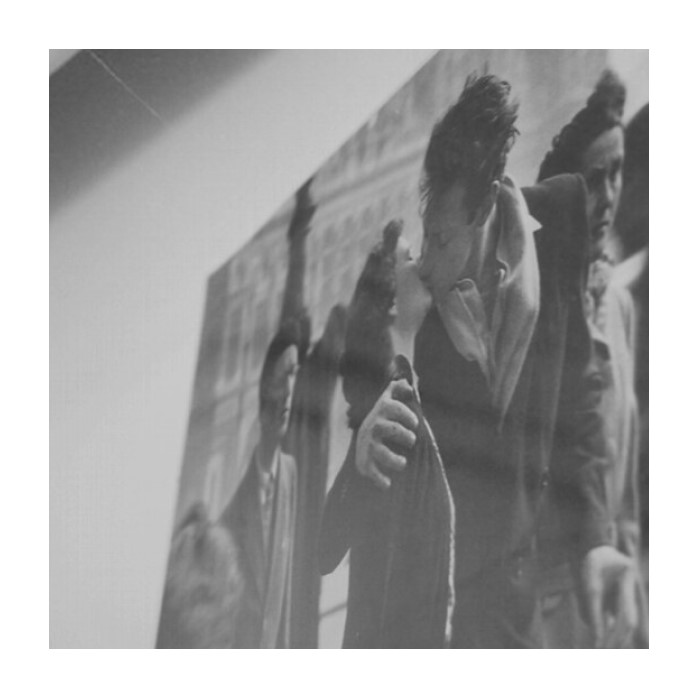 Cheryl Pappas is a writer from Boston. Her work has appeared or is forthcoming in the Chattahoochee Review, Hobart, SmokeLong Quarterly, Atlas & Alice, and more. She is at work on her first short story collection.  Her website is cherylpappas.net and you can find her on Twitter at @fabulistpappas.