I Asked for Yellow Balloons

A blue baby was scary, like a stomach-ache that wouldn’t go away, worse than bogey-men and the dark, trees in the wind, shadows on the windows, and shapes on the walls via the thin curtains which moved in the draught eking through the cracks in the frames.

I look at my little brother now, and I cry for the day all those years ago when Mum brought him home – our blue baby, two weeks before my twelfth birthday.

Not a nice sky-blue nor the deep cobalt-blue of Mum’s special going-out dress, but the insipid morose blue like the colour my nail turned when I caught it in the car door on the way to picnics where we sat on tartan rugs amid swarms of midges and ate egg sandwiches while watching a frisbee game.

Mum didn’t wheel the baby or leave him in his cot to sleep. She held him to her, upright, rubbing his back and head. She went out, taking the baby, leaving me behind with Dad, who said I didn’t need to go to the doctor.

I asked for yellow balloons for my twelfth birthday, instead of my favourite colour blue because it no longer was. Dad said Mum would miss my tea party because the baby needed treatment.

I wanted the treatment to happen another day.

Later, Mum came home from the hospital with a pinkish baby.

Dad went out to the car, returning with a bunch of twelve blue balloons – Happy Birthday on each one. It was one of my happiest birthdays.

The bane of my teenage years became the hero of my thirties when he rescued next door’s two-year-old from drowning in the garden pond. The local newspaper came and took his photo, told his story. He mentioned his band. He and the boys moved from the garage to a warehouse, sang the blues, fans began to gather. Bigger venues and manic crowds made him shrink, lose himself.

I should have searched for him, found him, brought him back to the fold.

He’s blue again, my little brother, lying on the cold slab, his arms and wrists a maze of white lines and puckered skin, his face pinched and contorted like that day Mum brought him home, except there’s no Mum, no Dad, no treatment to save him now. He had drifted farther and farther away, until he wasn’t there for the funerals.

I look at the shell of him. He’s gone, again, this time forever, leaving a piece of my heart always blue. 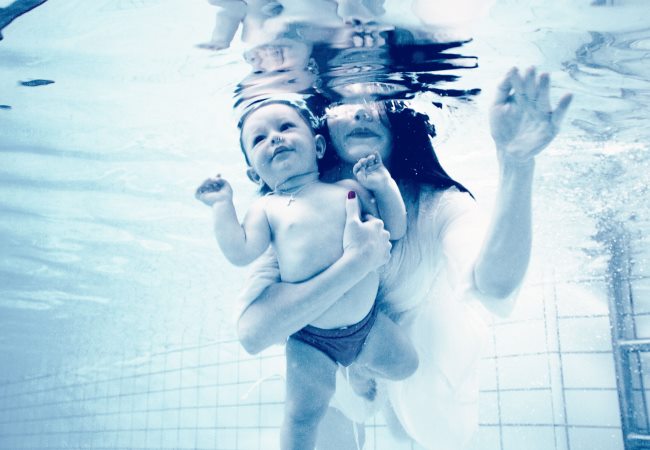 (Next: Prayer to the Bearded Virgin Martyr: On Hieronymus Bosch’s St. Wilgefortis Triptych by Jacqueline Doyle)