The water fountain barely reached above her knees; how strange to visit a childhood memory and find it skewed. On impulse she’d signaled, taken the exit. Kendra was surprised how little the town had changed, how easily she’d found herself parked in front of her old elementary school. It had been 15, no 19 – Jesus, her birthday in July would make it 20 years – since she’d last been here in this small suburb outside Washington, D.C.

School was out for the summer, but from the posted signs she knew a church-sponsored band camp was using the building. Everything was smaller, closer, tighter than her memories. As a child, she’d thought the ceilings were 100 feet high, cavernous and echoing like a cathedral, but now at 5’10, with a running leap, Kendra could touch the lowest metal beam. The walls had been painted white, which she thought was better than the puke tan color of the early 90s, but the faux marble floor was the same, shiny and reflective. Strained notes of rudimentary music floated down the hallway. She’d wanted to play the flute, but the band instructor, Mrs. Frye, a mean old hag with gnarled hands, told her she didn’t have the lung capacity, and when she’d asked to play the violin instead, no finger dexterity. Kendra had ended up playing the clarinet.

She wondered if Mrs. Frye was still teaching. She’d bet the woman had been younger than she’d thought, everyone seemed ancient when you were a kid. The only good that came from her time in band was making friends with another clarinet player, Melissa Goodrich, one of the only other black children in the school. But when her mother packed them up to Jersey, she’d left playing music, and Melissa, behind.

The principal’s office was where she remembered. Someone shuffled papers as she hovered outside the threshold. Kendra peeked in and saw a woman with her back to the door, bent over a copy machine.

“Can I help you?” A voice from behind made her jump and she immediately recalled the last time she’d been in this office, her mother rushing through the door to find her cross-legged in the corner of the principal’s office and crying. She’d been caught throwing a handful of rocks at towheaded Teddy Burns outside at recess and had refused to apologize, even when the teacher-on-duty had threatened to call her mother – never mind that she’d never been violent before and was a good student. Teddy had been sent back to class.

The man behind her looked about her age, white, and dressed like he could leave any moment for a round of golf. He was smiling at her the way school administrators smiled at children, mostly cheek, no teeth.

“I was just visiting. I went to school here as a kid.” Kendra hated the timid thread in her voice. Being back in this place had reversed time and she was once again that quiet little girl.

“An alum! How wonderful! Welcome back. I’m Principal Burns.”

What were the chances? Kendra had been reaching out in the automatic motion to shake his offered hand until he’d said his name and only ingrained politeness allowed her to cover the brief hesitation. When their skin touched, his smile never wavered and she knew it hadn’t mattered all those years ago what she’d said or who she’d told.

“What year did you graduate? I also went here as child. Went to college out west, but came back.”

“1993.” The principal’s eyes flicked behind his glasses. Did he recognize her? There was no reason he should. He did not look like the boy she remembered and she knew she did not resemble the scared black girl hurling rocks. She’d worked hard to make it so.

“What a coincidence! Me too! What’s your name? Maybe we remember each other?” Kendra tried not to twitch.

“Melissa Goodrich.” She hoped wherever her old friend was, she was well, and far from here.

“Melissa Goodrich. Hmm. Doesn’t ring a bell, sorry. It was such a long time ago now.” He smiled again, but this was a smile for an adult and some, who didn’t know better, might’ve considered it charming. Kendra clocked the closest exit. “Not much has changed, though. One major renovation in the early 2000’s, but most of the building is how I remember it, don’t you agree?”

“Yes. Others have said that, too.” Principal Burns shifted his weight from one foot to the other. “But remember we were the small ones then. And memories can often be wrong, don’t you think?”

Only when she was ten miles up the highway did Kendra pull over and run to the side of the road to vomit. She felt the wind, full of dust from passing cars, against the back of her sweaty neck. She spit but could still taste bile in the back of her throat. It was one thing to misremember the size of her old school, its dimensions in comparison to her childhood self, but it was another to forget Teddy pressing her face against the rough bricks of the exterior wall as his other hand reached up her dress. It was only that she’d been collecting rocks from the perimeter of the playground and that she’d had them clutched in her fists that had saved her. The first handful had made him let her go and the second caught the attention of the teacher-on-duty.

Kendra spit again. She needed to get on the road. Her husband was expecting her in four hours, and she was already going to be late. She regretted stopping. Teddy Burns. Principal and supposed role model. Almost twenty years. And nothing had changed. 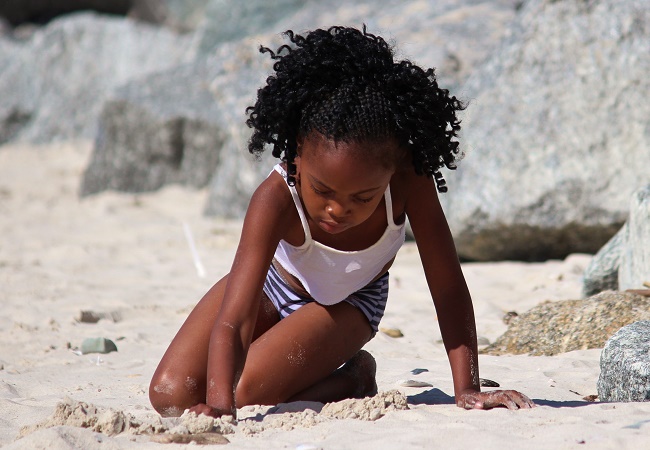 Monet Patrice Thomas is a poet and writer from North Carolina. She has an MFA from the Inland Northwest Center for Writers at Eastern Washington University in Spokane, Washington. More of her fiction can be found online at such places as Split Lip Magazine, WhiskeyPaper, and Third Point Press. All of her published work can be found on her website: www.monetpatricethomas.com. And the writer herself can be found dithering on Twitter: @monetwithlove.

(Next: Excerpts from the Diary of Matthew Ward by Mason Binkley)

(Previous: The Ages by Lila Rabinovich)