“What could go wrong?” she said. Utterly fearless.

“Everything,” I deadpanned back.

Scientists called it an eyeball planet. Always the same side faced its sun. Hot on one face, cold on the other. Life existed — we could exist — in the band where constant day met with eternal night.

“Not eternal,” Naima insisted, always smiling, quick to correct me. “Everything ends.”

At orientation, Lieutenant Colonel White, a man resembling a biscuit in a sock, attempted to explain how we’d reach “old one-eye.”

“In principle, it’s like travelling by slinky,” he began to explain.

I wasn’t much of a physicist. My mind wandered and I was five years old again, my sister and I launching our slinky down the stairs to the dirt-smelling basement where our dad worked on the furnace. We were not allowed to follow, so we called for him to bring it back. With remarkable patience, he did — over and over and over.

“Let’s sign up,” Naima had said, years ago. “They like pairs, and if you’re selected there’s a stipend, even if you never go anywhere.”

I argued that it seemed like a weird way to pay for a down payment on a house.

“As though we’ll really go,” she scolded. “It’s like the draft. About as much chance you’ll be called up, handed a gun, and dropped in a desert.”

Put that way, it sounded almost sensible. We got the house. We started casually trying for a baby. When that didn’t happen, we weren’t too concerned — neither of us was sure about that whole enterprise, anyway.

“Basically, the ship gathers distance and time, sort of coils it up, and you all spring forward together.”

“So why is this a one-way trip, if it’s as simple as that,” I asked, cutting White off before he could continue the explanation.

“Don’t worry, guys,” she said, smiling into the shocked faces staring at us two-by-two. “Cold feet! Like the dark side of” — and here she said the designation of the planet, as though she’d been spouting off the phonetic alphabet since kindergarten —”but he’ll be ready. We’re committed. Don’t worry.”

Turns out the one-way thing was a fuel issue. Also the fact that our bodies would have to adapt to the lesser gravity of the B49-AV2, and our children, when and if they came, would be unsuitable as earthlings, an effect that would crescendo over the generations. Also there was a time issue, which meant we would likely arrive as aliens in our own past. I lost the thread again before he finished talking.

When the call came, she wanted to sell the house. This was around the time we’d started debating getting a pet of some sort, maybe a ferret.

I didn’t want to sell. “What good is money going to do us?” I asked.

I preferred to leave the house to rot. I thought maybe my dad and my sister could come visit sometimes — like a gravestone for my Earth-life.

“They say it helps you prepare to cut ties,” Naima said. “We can give the money to a good cause.”

“I’m not having this conversation again,” she said. “Give the house away to the next bum you see, for what I care. But training starts six weeks from today, and none of this earthly shit comes with us.”

Training. Turns out it was mostly indoctrination into this artificial culture they’d had a couple of anthropologists draft up, to deal with sexual behaviors and conflict resolution. We were expected to adapt a sort of pansexuality that accepted non-reproductive couplings regardless of established relationships — so much for pairs. Productive sex was to be limited to a controlled orgiastic setting with females who had reached a minimum age of 32, which would allow us to remain more genetically diverse for longer and result in communal parentage. We were all screened for unhelpful genetic mutations and pederastic proclivities.

The anthropologists — nearly interchangeable dark-haired, bespectacled women — had created foundational myths for us that would help, they explained, bolster the “culture graft” they were giving us. “For you, these practices may feel unnatural. However, for your children’s children, they will be invisible — like water for a fish,” one of the women explained, pushing her glasses up the bridge of her nose.

They had modeled our conflict resolution practices on those of geographically-remote, similarly-sized villages that managed to live in harmony for generations.

There were myths for that, too.

The afternoon my sister, my dad, and I played with the slinky, the heater remained unrepaired and the house sank into the cold and dark of a winter evening. But I don’t remember minding the chill. Chill was a rare thing already in those days.

The morning before we flew, Naima peed on a stick and a cross appeared. She contacted White and he hastily arranged a team to scoop it out of her and put it on ice “for possible reimplantation upon arrival,” he said. This was all covered by the contract. This was what we’d signed up for when training began.

“Will it survive the slinky stuff?” I asked.

She squeezed my hand. Her wedding band bit into my palm.

“This will all work out,” she said, smiling.

Maybe one day I’ll stand in a shadowy corner of that basement with my alien grandchild beside me. We’ll stand, a crumpled ancient earthling and a lithe stranger, listening unseen to my dad curse the heater under his breath so my sister and I couldn’t hear his frustration, hearing the shush-shush-shush of a toy spring making its way down the stairs.

But then again, maybe not. Everything ends. 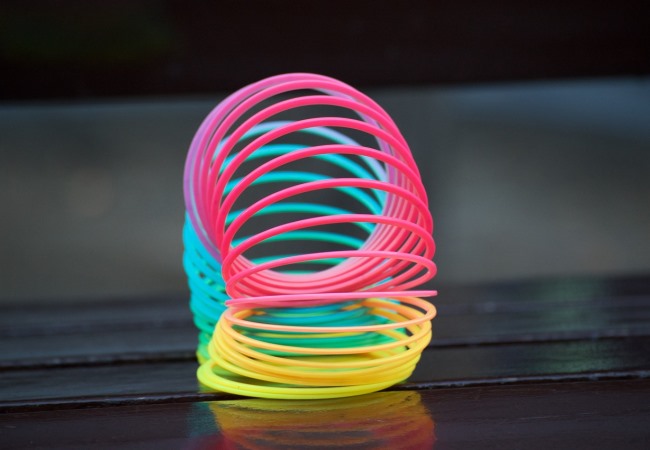 Jacquelyn Bengfort was born in North Dakota, educated at the U.S. Naval Academy and Oxford University, and now resides in Washington, DC. Her work has appeared in Midwestern Gothic, District Lines, Storm Cellar, Gargoyle, CHEAP POP, matchbook, The Fem, HOOT Review, and Dear Robot: An Anthology of Epistolary Science Fiction, among other places. You can find her online at www.JaciB.com.

(Next story: An Introduction to Meteorites by Nicholas Cook)