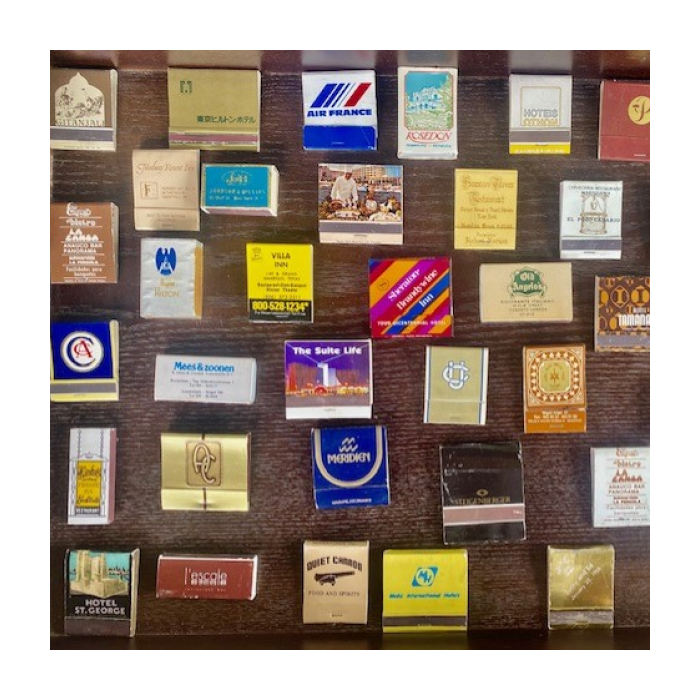 One of my earliest memories of my father involves him burning me. It wasn’t intentional. He was walking me into preschool. Shy and reluctant to enter the classroom, I reached for his hand and singed my fingertips on his smoldering unfiltered Camel. My father’s hands were rarely without one. A cigarette was his sixth digit, a tiny, ever-present firework, a small stick of dynamite that later caused his life to implode.

My dad’s love for smoking ignited at age eight when he started sneaking his grandmother’s Chesterfields and puffing away with older cousins. Having lost his father at two years old, my dad spent his days with his grandparents while his mom worked. In Upper Manhattan during the 1940s, smoking seemed like the perfect prop for a boy forced to grow up too quickly.

After putting himself through college, my dad found a job in the insurance industry. His career took him around the globe. When he returned from his travels, my brothers and I waited for him to unpack his large black suitcase. Often it held interesting souvenirs from countries whose names we couldn’t spell. Other times, he gave us packages of airplane peanuts, which were equally enthralling. Always, he emptied his pockets, tossing matchbooks into an old coffee can.

My father told us when he was a teen, he’d asked a guy for a match.

“Yeah, your face and my ass, kid,” the man replied. That verbal burn sparked my dad’s lifelong habit of collecting matchbooks. An inside joke, we deployed that line whenever the word “match” popped into conversation

During dinner, my dad told us about the world beyond our suburb while sending smoke rings dancing toward our chandelier. Silver cloud above our heads, we thought nothing of it. It was the 1970s. Smoking was as commonplace as bellbottoms and The Bee Gees. As he morphed into our very own dragon, plumes streaming from his nose, we cheered, too young to know that our father’s favorite hobby would eventually suffocate him.

After suffering a heart attack in 2000, my dad stopped smoking, but spoke of it often. He dreamt about a stray fleck of tobacco on his tongue, that distinct sulphur-y scent after a match hits the striker. Each Christmas, he threatened to buy himself a pack as a present, causing my mom to grumble, “Don’t even think about it, Ed.”

In certain settings — weddings, casinos — my dad would sidle up to a stranger and ask for a “loosie”, pressing a dollar into the palm of a fellow smoker. I pictured him in an ethereal haze, head floating from that first drag, inhaling memories.

Diagnosed with chronic obstructive pulmonary disease (COPD), a condition which worsens over time, the last few years of my father’s life were nearly as painful to watch as they were for him to endure.

For so long, my father had seemed invincible. He’d been on a plane that had been struck by lightning. He’d been in the World Trade Center during the first bombing in 1993. He’d ridden in a train car that derailed. By his admission, he drove like a madman. He’d had a heart attack. He’d survived it all. To us, he was unbreakable — until he found himself unable to perform the most basic human function: breathing.

In recent years, each time I called my parents’ home, my mother answered. Through teeth clenched from the strain of watching her husband of fifty years gasp for air, she began every conversation the same way: “Your father isn’t feeling well.”

Before long, tubes trailed him the way smoke once had, and the man who’d jetted around the world became housebound. The hiss and snap of the oxygen concentrator formed the soundtrack to their lives.

It was hard not to be angry, not to ask, “Why didn’t you quit sooner?” not to wonder if it would’ve made a difference, not to insist, “It didn’t have to come to this.” I wanted more time with him.

For all his traveling, he’d never made it to Positano to look for his father’s family as he’d hoped. When he finally had the time to enjoy a trip, he was no longer physically able. How could he fly 4,500 miles when he struggled to walk a few feet to the kitchen without doubling over?

During the pandemic, my father was admitted to the hospital for a COPD exacerbation. We were told his lungs were “shot”. They gave him oxygen, but it was like pumping helium into a balloon with holes in it, doctors explained. It was only a matter of time.

After he passed away last May, my mother encouraged us to choose from his belongings. My brothers and my teens picked items they wanted: power tools, his favorite jacket, a handful of comical $2 bills.

Still numb, I didn’t make a choice. That would make it real. Final.

Months later, my mom stopped by. “You’re always lighting candles,” she said. “I thought you might like these.” She handed me a bag filled with matchbooks from all over the world. Most dated back decades. They smelled like my father.

I spread them out, admired their covers, studied the names of restaurants and hotels, many in languages I don’t speak.

It’s strange that the thing he used to light the cigarettes that ultimately ended his life has brought me the most comfort.

When I look at them now, they remind me not of how he died, but of how he lived. I imagine him in these places, color in his cheeks, a sparkle in his green eyes, breathing easily. I can hear him at our dining room table, telling us where he’d been, what he’d seen, sharing his opinions on the best steak, the strongest coffee.

Then I go back further and envision an eight-year-old on a fire escape overlooking a city, his whole life still ahead of him.

If I stop and inhale, I can almost smell the smoke.

Liz Alterman is the author of the domestic suspense novel, The Perfect Neighborhood, the young adult thriller, He’ll Be Waiting, and the memoir, Sad Sacked. Her work has appeared in The New York Times, The Washington Post, McSweeney’s, and other outlets. She lives in New Jersey.

Art: Author’s own ALT pictures of the matchbooks from her father’s collection

If you like Jellyfish Review, please please please support us with a donation. We want to pay our writers this year and need funds to make that happen.

Next: Leftover by Glen Pourciau

If you like this story, why not share it on social media and make a writer and a magazine very, very happy!