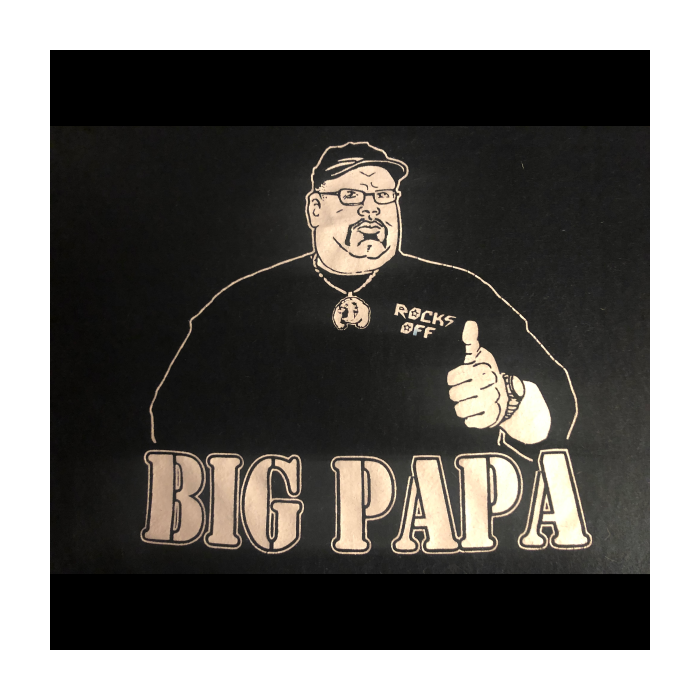 By the leather of his belt. Up ten whole stairs. Or five. Or maybe only three but it might as well be ten. Because everything about Pa is set to max.

And the guy splatting on the landing is straight Looney Tunes, as in any moment a droopy dog could come along and scrape the pancake of him off the carpet.

And he’s getting what he gave — only moments before pounding the bar so hard I heard it over the drum solo, so hard the Coronas quivered out their limes, so hard the champagne flutes toppled like chopped trees. Calling out, “Hey, ma! Hey, ma! Are you sure you put alcohol in this?!”

And in the next beat, his small world of aggression expands, encroaches. Until a sliver of crowd becomes one big shove and bodies overlap, everything bubbling — but there’s no actual fight, just a prologue to one, which is the state of events that Pa’s mastered. A six-foot something bowling ball pummelling human pins until his hand palms the back of the guy’s neck. That hand that palms a basketball like a peach, leading the culprit toward the red exit sign of no return. All this occurring before the song’s end, so that most of the audience never know it happens, and when they recount their night to friends, this part will be left out.

2. Big Pa is Delighted by Nature

Two women in their early 20s, N. and me, are slicing lemons and limes on cutting boards at the long wooden bar. N. almost hacks her finger and punches the air, cursing ornately. An enormous hand knocks on the bar twice. It’s Pa, rocking his signature gold chain with bulldog emblem, fisherman’s cap and D.M.C glasses. He leans in — eyes aglitter — a huge anticipatory grin.

You’re never gonna believe what
I saw in Central Park.

Right in the grass. Guess!

Better than that.
An all!
Black!
Squirrel!

Did you hear me? I said an
All. Black. Squirrel.

You tryin’ tell me you seen
an all black squirrel before?

I don’t wanna’ hear that.
It was something special.

3. Big Pa Rescues Me from a Club Downtown

When S. ditches me for a yuppie she meets on the Q*Bert dance floor,

When all I have in my pockets is two quarters, a rubber band and the carcass of a receipt,

When I call him even though it’s practically sun up because he told me to if I ever found myself somewhere sticky,

When I explain I’m cashless downtown at Culture Club,

When he instructs me to find a bouncer named D. at the entrance and sure enough, he’s there,

When seconds after I hand my Nokia to D. he hands it back with 25 bucks,

When the sunrise meets me at the 59th Street Bridge,

When the Ravenswood stacks stir home in my bones,

When I think about people describing angels watching over them from above, I wonder how it’s possible that angel is never a 300lb. black man.

4. Big Pa Buys Us a Present

It’s the day of a Christian rock show, which means a night of Cokes, tight-lipped smiles and stealth wallets. Pa saunters through the club doors as I stack glasses. Carrying a plastic bag from Lids.

My mouth goes cheese. “Ooh, what is it?”

But first he wants Fire Marshall Bill. It’s sort of our thing. I do the impression until he’s a meaty right angle, and upon finding himself vertical again he calls me the fe-male Jim Car-rey, awarding every syllable its own oomph, and therefore its own point of reflection.

So, I do it for him for the hundredth time. Wipe my mouth dry with my knuckles so my top lip sticks to my gums as I speak with my teeth, “Let Me Tell You Something!” and Pa rolls, hee hee hee. And he says it, you the fe-male Jim Car-rey, and I stand, chin tilted to the words like the sun.

And then he tells me to follow him backstage; that the gift’s not just for me, but for N. and B. too. We’re his favorites, he says, like we don’t already know.

And he peeks open the Lids bag to three baseball caps with the words Pa’s Angels. Like some baby shower nightmare, they’re powder pink with baby blue lettering, and we bust out laughing, with spray from our lips misting the backstage air, mingling with the clouds of weed smoke drifting out the band room. And he laughs too, because they are ugly, so fucking ugly. And sometimes I put on that fugly baseball cap, or remember that bouncer ready to help at the sound of Pa’s voice, or look back at the pictures N. and I took of the all black squirrel we searched for in Central Park the month after Pa passed, about how the minute we saw it, we knew he was right, how it was special, and damn us for not seeing that sooner.

L. Soviero was born and raised in Queens, New York but has made her way around the world, currently laying her hat in Melbourne. She has an MSc in Creative Writing from the University of Edinburgh. When she is not writing flash, she works as a Learning Designer. She has been longlisted at Wigleaf and spotlighted in Best Small Fictions. Check out more of her work at lsoviero.com

Art: Jake Szufnarowski (with permission) ALT Drawing of Big Papa wearing a Rocks Off t-shirt, a chain and a baseball cap

If you like Jellyfish Review, please please please support us with a donation. We want to pay our writers this year and need funds to make that happen.

Next: A Man in the Form of a Signature on the First Page of the Book by Geet Chaturvedi [tr. by Anita Gopalan]

Previous: Bodies and bodies of water by Rebecca Ackermann

If you like this story, why not share it on social media and make a writer and a magazine very, very happy!