I never really liked him. Tomás was a serial liar whose fictions revolved around his social circle and sex life, easy to identify as fictions because they were only ever delivered to large groups of people. His popularity and promiscuity never came up when it was just two or three of us; when each tale would be subjected to closer scrutiny; when there was no one worth impressing in the first place. Near the end of our last year in college, I confronted him about this. I called him a liar, which he didn’t deny. Mutual friends got involved and the general verdict was: who cares?

Four years later, I’m stepping off the bus in a town I’ve never visited before, with only a dying phone and Google Maps to guide me. The walk, it calculates, is twenty-three minutes long, and the suggested route takes me past market stalls and discount stores to what looks, strangely, like a residential area. I get lost a few times, have trouble locating the right building, but I’m still ahead of schedule when I’m waved in by a guard and sign my name in a book. I’m led to another reception where I sign my name in another book, and a woman lets me inside. I wait a few seconds and a man introducing himself as Rory holds out a hand for me to shake. Finally, I see him. The first thing Tomás says, raising a palm up in salutation, is: Welcome to the nuthouse.

He leads me to an inner courtyard with sad familiarity. He’s been here for less than two weeks, and whatever medication they’re administering has made him balloon around the chin and gut. I’d met Tomás, for the first time in years, a few months prior to all this: for drinks and a catch-up, where it was clear that neither of us would become the men we’d dreamt we’d become in college. He’d mentioned some problems then, that he was seeing someone, taking something. Then I got a text message. The reason Tomás was sectioned is because he started stalking a colleague who was bullying him. He even devised a plan to tamper with the wheels of that colleague’s car, a plan apparently thwarted, by his therapist, less than two days before its execution. His medical record states that the voices in his head told him to do it.

I ask him a series of questions. He answers them in turn. Schizophrenia. Deep tissue injection. Eviction. No smoking. His mother and father have already visited him; I’m the third. All told, he’s unapologetically affable: subdued, but himself. Mostly he’s interested in the other patients, or inmates as he calls them. The courtyard has windows looking into his ward, and he points to various people as he speaks.

‘See that old lady? She thinks I’m her son ― David, she calls me. Said it’s been ten years since she last saw me. Wants to know when me and the wife are going to give her grandchildren.’

‘Guy over there is totally paranoid. Drug-induced paranoia. Weed or cocaine ― maybe both. His room’s right next to mine and the other day he came knocking at about two in the morning, said he can hear me chatting shit about him. Had his hands balled up but didn’t do anything. Night nurse took him back to his room and he forgot all about it the next day.’

‘You meet Rory when you came in? Did he go in for a handshake? Yeah, better use the soap dispenser on your way out.’

I don’t need his stories to understand that he’s the most stable person in the ward. He talks about men jerking off in front of the nurses and women walking around naked, creating a mess with excrement and menstrual blood in their own rooms or the halls before someone stops them with a soothing voice and a syringe. I ask him if anyone’s intervened like that with himself, and he mentions a suicide attempt. It’s impossible to tell if his indifference is real or the by-product of medication, but in this place I’m not asked to make the distinction, only to believe that this man is not the classmate I knew and that somehow, someway this is the only environment capable of bringing him back.

We sit for a while longer, Tomás inhaling vapour from a disposable e-cigarette, transparent and solid-state. He tells me I can take a drag, too, or buy one of my own in the ward; I tell him I’ll wait until I’m back outside. I look for signs of resignation on his face, but there aren’t any: he’s simply existing. Finally, I ask him how he got to this stage, why he wanted to kill that colleague and why he thinks he’s here at all. He shrugs, talks vaguely about cognitive dissonance, not being able to live how he wants and that, in the end, he never really liked anyone.

‘Because talking to people, it’s like a job interview. You don’t want it and you’re a bad fit ― but the way things are, you need it more than anything. So put on a little show. Smile, make eye contact. Just be confident, be yourself. And have a passion, because everyone’s fucking watching.’

I’ve been with him for almost an hour. Standing, I tell him to fight this whole thing: talk to someone, appeal, make it known that he doesn’t belong here. Tomás gives no indication that he will, only walking me to the ward’s exit. I ask him if he’s expecting any other visitors and he says only his parents. I tell him I’ll visit him again in a few weeks, and his face screws up, playfully; he tells me I’m such a moral person. I tell him morality has nothing to do with it. I want to tell him I’m his friend, but he’ll probably think I’m lying. 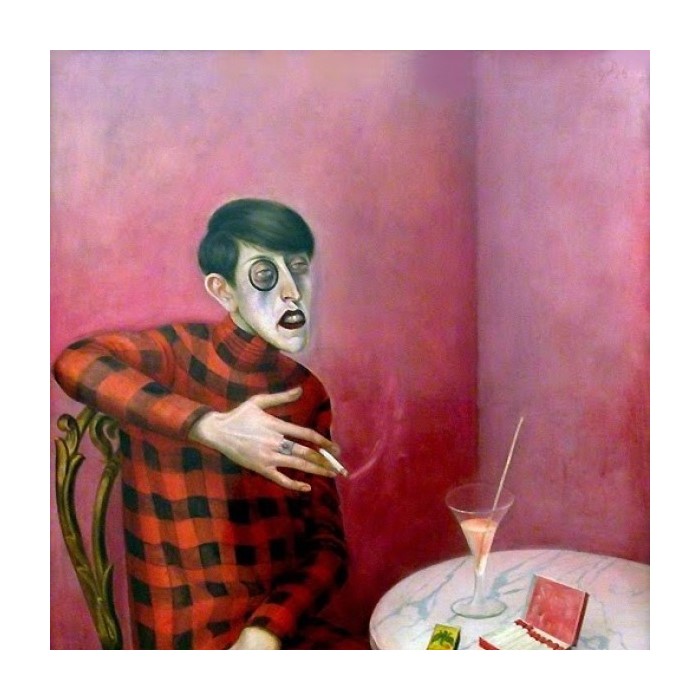 (Next: Kidding, Kidding by Di Jayawickrema)