Chris Merkin called her Cake Face because of her makeup. I laughed when he said it. Kimber might’ve been Cake Face but I was Two Faced. Both my faces were ugly. The next morning, I reported his insolence to Kimber. She said who the fuck cares. Cake is delicious. Which was exactly why I hung out with her.

That’s what he’d been asking: why do you hang out with Cake Face? In my head that question was flipped. I didn’t know why Kimber hung out with me. She was live wire she was barbed wire she would slip me kohl eyeliner in homeroom. I wasn’t even allowed to wear makeup. Kimber solved my problem. Sharing makeup is the type of thing you do as a freshman when you have no fear of God or infection. I snapped open her metallic blue heart-shaped compact mirror. My hands twitched as I underlined my eyes.

The look we were going for with makeup wasn’t pretty. Not conventionally pretty. Kimber’s cousin was a SuicideGirl. We never straight up said it, but we were mimicking her. Stone-faced like mimicry plants. Tiny flora that avoid getting eaten by blending into the rocks around them. After school but before mom came home, I scrolled through the website. What got me was how SuicideGirls just looked like a bunch of thin chicks with good bone structure and attractive features. Their noses, for example, were white and dainty. I wondered what made SuicideGirls alternative. Beyond plugs and tattoos I didn’t see how these girls differed much from a model in a Maybelline ad. Punk couldn’t just be the same shit in a cooler uniform, could it? I cleared the browser history.

Make up is totally transformative for some people. I was still me now with gothy gunk on my face. It looked better on Kimber. Her white girl features could stand it. Green eyes enhanced by black. I got Japanese black holes. It sucked to still be the same, to look different, to not have picked this body like a character in The Sims yet still have everybody see me and read: Asian girl, to then have those two things be my defining identity despite having no say in choosing either one, to argue with boys who insisted my last name was a country in China. How are you gonna have a country inside another country? I’m not even Chinese! A Merkin is a pubic wig not a last name! It sucked to want Chris to call me beautiful but instead I was kicking him in the shins. I saw all of this in that heart-shaped compact mirror, inextricable from my reflection. But now Kimber was saying who gives a fuck, Chris. I shut the mirror and shakily stabbed Kimber with the eyeliner pencil. She snatched it back.

“Garrison must’ve put extra espresso in my drink again today,” I said. Garrison was Kimber’s boyfriend. He made us free drinks at Starbucks. The catch was he made the drinks too strong. Anything was preferable to when he worked as a sandwich artist at Subway, where he claimed to piss in the pickles. Not that Kimber noticed my hands. Plus that explanation was a lie. I was practically bursting out of my body wanting to tell Chris about Kimber’s comeback. To let him know someone didn’t give a shit about him. Like I said, I was Two Faced. But now I’m not so sure anymore. Maybe I was facelessly shuttling between Chris, Kimber, SuicideGirlsMaybellineChinaJapanboyfriendsespressoshotsandeverythingelse trying to find my own damn face. Pretty or not as long as it was mine. 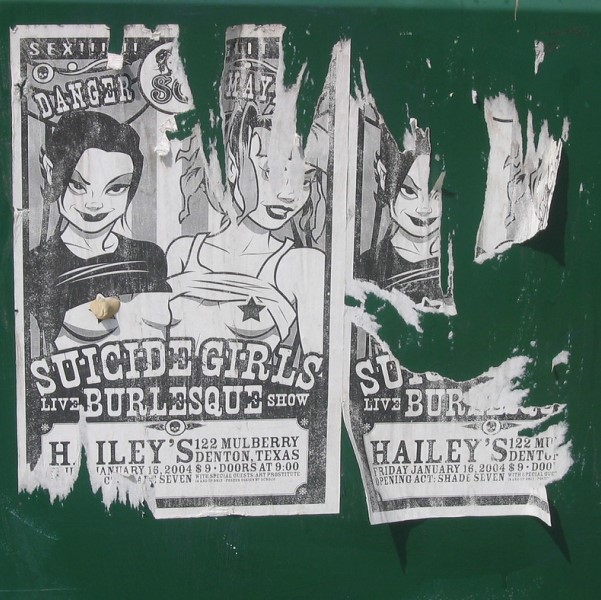 We rely on gifts from readers to keep going. We don’t charge submission fees, and the advertising you might see here is WordPress, not us. So please give a little if you can (or give a lot – that’s okay too!)

(Next: What Hands Can Do by Meriwether Clarke)