The direct view of the valley from where we stay used to be of the knuckles of the foothills and the higher, snow-draggled peaks behind them. Once there were villages in those foothills, terracotta-roofed, strung out like spiderwebs and glittering in the sun. And closer: rows of vines and pale cocoa-coloured fields freshly turned, and ivy-wrapped trees, the delicate, reaching blue limbs of pines, olive trees showing their silver leaves, the ample woodpile stacked on the other side of the road. This was the view right from the covered terrace. Just yesterday, there was still a sense of it, from the emergent constellations of the streetlamps, glowing in the haze as the last light leaked out of the sky. Some time after we had all gone to bed, the westward mountains were put away. Now there is no view.

It happens every year, apparently. A friend of ours who has lived here his whole life came up to the house to tell us what had happened. He understood that we would be afraid. He leaned out on the terrace, gesturing with his little cup of coffee at the new plains. The mountains are for the winter season, he said simply, and in spring they have to go. A team of young men start early, in the dark, making their way up with bolt cutters over their shoulders for the guy-lines that keep the mountain slopes upright. In the olden days, they used to drive mules along the rough tracks to the pitching points, axes then, and hammers, for this work. The bravest four would go under the skirts of each mountain to remove the central poles. In the period after the war, our friend said, ‘47 or ‘48 I think, there were several deaths. Once the pole comes out you have to move quickly. The mountain moves quickly, when it falls down.

What about the mountains behind us? one of our party said. Our friend shrugged. Tomorrow, he said. Tomorrow? Where are all the people in the villages that were over there? What’s going to happen to our house? We’ve rented it for next week too. The local gave a dry little chuckle, somewhat sinister, like a cicada’s laughter. There is a mountain here called Il Uomo Morto, and did we know it? And yes, then, did we know how many men have died here, changing the face of the mountain to his own? With that, he brought out a handkerchief, wiped his lips, and left us, and we sat in the swing seat or else hung over the edge of the balcony, like people sick at sea.

At length, one of us said, well then, time to open one of the Torre reds, who wants a glass? And soon after this we were filtering the stuff through our teeth, letting it stain our teeth and lips, saying things with our stained tongues like, it has a very fine taste, very clean. It’s good wine they get here, in this country, and the people work so hard, and are so brave. 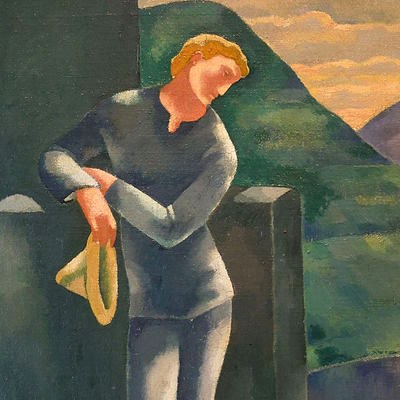 Helen McClory is a writer from Scotland. Her first story collection On the Edges of Vision, won the Saltire First Book of the Year 2015. Her second story collection, Mayhem & Death, was written for the lonely and published in March 2018. There is a moor and a cold sea in her heart.

Every time you donate, a crab falls in love🙂

(Next: The Wisdom of Lying by Bobbi Lurie)