This story has suicide and zombies

Well before the world almost ended, my best friend turned to me during a zombie movie and said, “if there are ever really zombies then you better fucking kill me.”

“What? Why? We could totally survive that,” I said.

She gestured at the screen, where a lady zombie was devouring the man she had once loved, and said, “why would anyone want to live in that world?”

Years later, after the zombies had come and gone, and the world was being rebuilt, I thought what she had been asking wasn’t why anyone would want to live in a world of zombies but rather why would anyone want to live?

The thing about zombies, once they happen, is that it’s never as catastrophic as everyone predicted. Like all those diseases everyone fears, they never actually do as much damage as we think. But the thing is: that’s already more than enough. Sometimes, in the mirror, even all these years later, I’ll catch a glimpse of myself and I’ll look for bite marks, for scratches, for signs that I’m going to change.

My best friend had the best laugh of any person I knew. It filled a room, made me laugh, the way she’d start laughing and couldn’t contain. Sometimes she’d press her hands over her mouth trying to stifle the sound and I could still feel it under my skin. She was laughing the last time I talked to her, some joke that I can no longer remember the punch line to. I used to save them up just for her, funny things I overheard. She was still laughing as I hung up the phone.

I killed my first person on the second week of the zombie outbreak. Walking home, I heard them shambling up a side street. The zombies shambled, something about their brains being in a dormant space, I never understood the science, so that all of their motions were a pace behind what they were thinking — it’s why they walked into walls, tripped over stairs so much. It’s why when they tried to speak, shout “please, don’t,” the words came out garbled, nonsense. I turned and saw the zombie, teeth bared, arms out, and I didn’t even think, just used the gun I’d started carrying. The zombie hit the ground with a clunk, and I could see that it was a man I used to see around town – walking his dog, mowing his lawn, pushing his daughter in her little wagon. The man looked startled, eyes to the sky, one hand outstretched. When they died, zombies always just looked like us again, you couldn’t see the change anymore. They just looked like us.

“Do you believe in ghosts?” my best friend asked one night.

I was in bed, the phone on the pillow next to me because I was tired of holding it up to my ear. “I don’t think so. Do you?”

“No, it’ll definitely be me,” she said. And I didn’t think about it.

A friend, years after, told me about what it had been like to have to kill their ex-boyfriend. They’d only broken up the week before and then there he was, one of the first turned, and she’d gone to his house to pick up some stuff she’d left there. She hit him with a frying pan. “I can still feel the vibration in my arm, you know? The pressure in my wrist as it collided with his head. It wasn’t him, though, right?”

“Nah, of course, it wasn’t him,” I said. And we both took a drink. And I listened to the TV tell us about the weather, how sunny it’d be for the next week.

My best friend didn’t leave a note. But people saw her, knew she did it on purpose. Nobody climbs a bridge railing just for kicks. I wanted to tell her that, I wanted to see if she laughed. It was a year before the apocalypse came and there was no reason for her to have climbed up there. No reason but every reason she must have had.

In the first few weeks, the news was filled with so much terror. The newscasters spoke with such held breaths. But a couple of months in and everyone was already talking about other things. The zombie count was saved for a quick interactive map shot and a comment or two reminding about precautions in places. The world almost ended and then didn’t so quickly that some people don’t even think it should be in history books. Within two years, you could walk home at night and, if you’d never been attacked, if you’d never had to kill one, if you’d never lost anyone, you might not even jump if you heard a trash can rattle in the wind.

I don’t dial her number anymore, just to hear someone who isn’t her pick up, so I say, “wrong number”, and hang up. I don’t try to hear her laughing, but I can’t remember what it sounded like, the way it felt to hear, anymore anyway. I have pictures of her, but I don’t look at them. I don’t google the plots of zombie movies anymore, try to find ones we both haven’t seen. I don’t tell her that I miss her anymore, expecting her ghost to answer because she said she’d haunt me. Or only sometimes, I do.

The thing I can’t stop doing is: I keep thinking about how she didn’t live long enough for me to not kill her, to not honor her wishes; for me to make her stay alive through the apocalypse; for me to save her over and over. I don’t stop thinking about how we would have survived and she’d have turned to me, after it was over, and she would say, “can you believe that I ever thought we’d die?” And, we’d both laugh. We’d laugh until it bled through our fingers and filled the air so loud we’d think it might never stop. 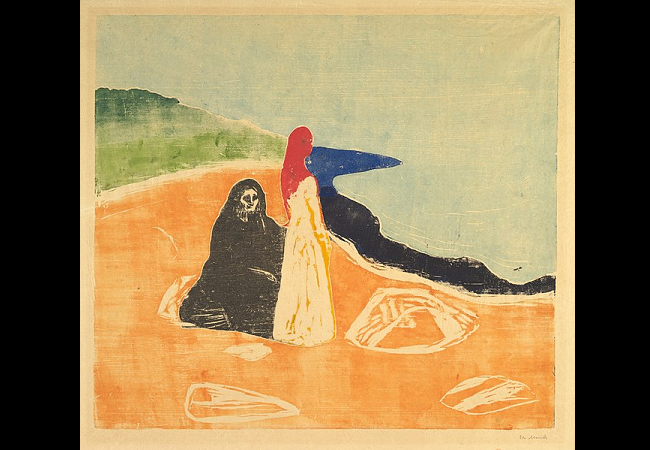 Chloe N. Clark’s work appears in Apex, Booth, Glass, Little Fiction, Uncanny, and more. Her chapbook The Science of Unvanishing Objects is out from Finishing Line Press and her debut full length collection, Your Strange Fortune, will be out summer 2019. Find her on Twitter @PintsNCupcakes

Also by Chloe N. Clark The Intimacy of Objects

(Next: On January 18, there are still bombs by Maria Alejandra Barrios)

(Previous: Understanding Picasso & “It Is an Experience” by Olivia Dunn)