The fireman’s shoulders were broad enough to fit the words TRUCKEE FIRE DEPT across the back of his navy blue t-shirt. The woman sat across from him, facing him I assumed, though he eclipsed her from my view. I could hear her voice occasionally peek out from under his voice and around his shoulders and I wondered what she looked like. I pictured him with a mustache, a trim graying mustache to match his trim, graying hair. They were locals among tourists in the small, mountain town of Truckee, California. It was a pleasant summer evening for sitting on a sidewalk patio at a strip mall restaurant. A waiter brought chips and salsa and water to their table and their voices stopped. When he left, they continued their fight.

I knew it was a fight because I recognized my voice in hers. The uninitiated might have called it a discussion or called it nothing at all. But it was a fight — still low and controlled like water simmering in a pan but ready to boil over in a second once someone inevitably turned up the flame.

I tried not to stare. That portion of the already too small patio had grown even smaller as I tried not to stare because staring is rude even if you’re just staring at the back of someone’s reddening neck. And when steam began to waft around their voices, I tried not to listen. The waiter came to take their order and hesitated before approaching their table.

The patio was busy. Another couple, younger, arrived and took a table close to the fight though the uninitiated still would not have called it that — a disagreement perhaps but not a fight — and the fight was silenced again. I hoped my take-out order would be ready soon. I focused on the tarnished beauty of the evening.

Summer in the mountains is sublime. The sun had fuel enough to burn for one more hour but the chill from the steep hills was slipping in. I should have brought my sweatshirt. I would have retrieved it from the car but my order would be ready any second. Besides, the fight had moved to the parking lot.

I had been ignoring it, because it was none of my business and that’s what one does when a couple is fighting in public is ignore it. Apparently I’d ignored it so well that I hadn’t noticed that they’d moved. At first I didn’t recognize them. I hadn’t seen their faces when we’d all sat together on the patio. I thought that was a different couple, standing there behind a white pickup truck having what even the uninitiated would call an argument. But I recognized his t-shirt and I recognized my voice in hers as she struggled to be heard.

I wondered if he was really a fireman or if he was wearing a t-shirt that anyone could buy at any gift shop in town because I didn’t think a real fireman would act this way. I wished he would stop yelling.

When he grabbed her I wanted to say something.

Stop that. Leave her alone.

But the words wouldn’t come and even if they did, they’d sound weak and pathetic. He’d laugh at me, or worse, she’d laugh and tell me to mind my own business. Anyway he wasn’t really hurting her. He’d grabbed her wrist was all. She had his keys in her hand and he had a hold on her wrist as he pulled her hand up in front of her face and then above her head and he was yelling at her to give him his keys and I wished she would. But she continued to clutch the keys, wordlessly, and I no longer heard my voice in hers. Did she hear her silence in mine?

Again I wanted to say something. This had gone too far. But it wasn’t like he was hitting her and even if he was, what could I do? I was no bigger or stronger than the woman. I might as well have been her for all that I could do to stop him. And they were right there, a few feet away and there were other people around. He wasn’t going to hurt her in front of us.

He brought his other hand up, smothering her hand that held the keys in his two-fisted clutch. They struggled and it looked like he was holding up a piñata, but her feet were still on the ground, I was sure. I was going to say something. I was, but my heart was pounding in my ears and my mouth was dry as I tried to form the words.

That didn’t come from me. It came from a guy who had stepped out from the shop next to the restaurant. He stood on the sidewalk and he’d yelled at the fireman and the fireman let go of the woman and yelled back.

The man on the sidewalk was young. He had a patchy beard and wire-rimmed glasses and he wasn’t very big.

He held up his phone.

The fireman let go of the woman. The woman let go of the keys. The young man watched as the woman walked away and the fireman returned to the patio then he went back in the store. My order arrived and I thanked the waiter and left without saying another word. 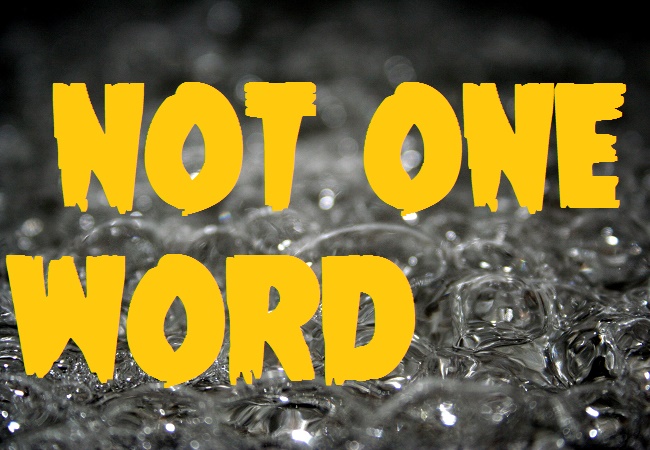 Julie Hall grew up on various Air Force bases across the U.S. and one in Japan. After retiring from the position of military brat she attended college, raised a child and had a career in computer programming in Las Vegas, Nevada. She currently resides in Austin, Texas with her partner, musician Christine Cochrane, and has been published in the Austin Rio Review.

(Next: Coming Back to Bite You by Marie Gethins)

(Previous: Considering a Story Told by My Mother about a Patient by Lee Matalone)