The Evolution of the White Woman

The white guy looks at me and says, “He was disrespectful to me. He disrespected me.”

I say it again. “That wasn’t very polite.”

Meanwhile, the black guy ignores everything. I try to catch the eye of the black guy, as if to say Man, white guys these days, am I right? but he is completely uninterested. It is as though we are in some white people sitcom he didn’t want to watch. The white guy pedals back down K Street. The WALK sign comes on and the black guy crosses the street and walks away from me.

I’m at my therapist’s office. I say, “I wish I had done things differently.”

“What do you wish you’d done?” she asks.

I say, “I wish, when I finally had the chance to be heard, my voice of protest hadn’t sounded like a preschool teacher. ‘That wasn’t very polite’? Why didn’t I make it perfect and ask him to use his inside voice?”

White guy on bike, black guy steps off curb, same as before. White guy says, “Get out of the way, fuckhead,” as he’s passing the black guy. Black guy doesn’t move. I don’t move until the light changes and the sign reads WALK. Then I cross the street. Black guy still stands there. Like a statue.

“I also wish I hadn’t looked at the black guy for affirmation. That was desperate. An attempt to say See? I’m a cool white lady. I understand that Black Lives Matter.”

My therapist takes a seat and says, “I see you’re ready to pick up where you left off. Good, let’s get right back into this.”

White guy on bike. Black guy off curb, and a bunch of black guys on curb behind him. And me. Same things happen. Except white guy doesn’t come back and say “fuckhead.” I’m like, not so tough today, are you, white guy? He doesn’t hear me, though, because I say it in my head.

I meet my boyfriend for coffee and tell him the story.

He says, “This has nothing to do with race.”

I say, “This has everything to do with race.”

“He was just some hothead. He would have yelled at anyone. Why are you always trying to insert yourself into other people’s drama?”

No, I’m not. Aunt Mary was infuriated when Arsenio Hall got his own talk show.

This time, black guy is on the bike and the white guy steps off the curb. Everything else happens in the same way. Police officer comes by and arrests black guy, possibly shoots him, depending on crowd. He’s on trial for assault within a month.

I’m back at my therapist’s office. I say, “I wish I had done things differently.”

“What do you wish you’d done?” she asks, and this time it feels like she cares about my answer.

“I wish I would have pushed him off his bike.”

I grab the white guy by his arm and pull him back.

He says, “What is wrong with you? Get the hell off me.”

I say, “You have no right to speak to people this way. You’re a racist, and I’m letting you know that some of us are sick of listening to this.”

He throws me off, and I lose my balance and fall to the pavement. I hit my head. The sign changes to WALK and everyone crosses. Nobody helps me. I lie on the pavement, bleeding from my mouth.

I’m still talking about this. My therapist rolls her eyes.

She says, “Try another version.”

In the Kalahari Desert in South Africa, an antelope called a springbok puts her head down and leaps seven feet in the air – her legs stiff, her back bowed, her white tail lifted – in an action known as “pronking”. She uses valuable time and energy that could be better spent escaping from her predator. She is signaling.

In biology, signals are an adaptation that changes the behavior of the signaler and the receiver in ways that benefit them both. The springbok tells the predator: There is no use chasing us. We are fit.

White guy, black guy, here’s the change: When the white guy screams his curse word, I jump into his path and push him back with my forearms, like a bouncer. He falls to the ground, getting tangled up in his bike.

He says, “What the hell are you doing?”

I say, “This is called pronking, motherfucker. Google it.” 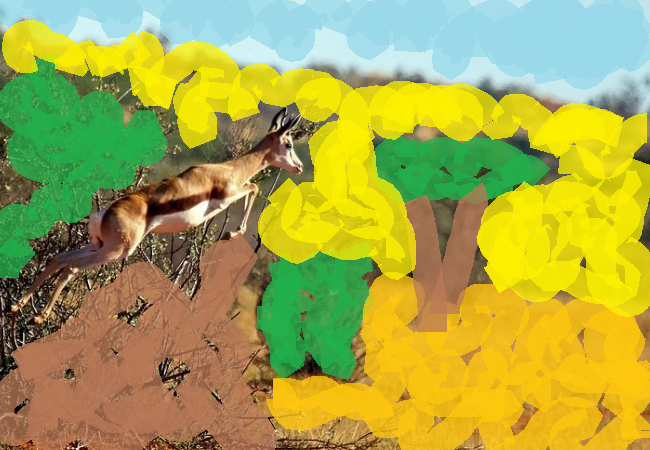 Jeanne Jones is a writer and writing teacher living in the Washington, DC. area. She holds an MA degree in Fiction Writing from Johns Hopkins University. Her work has appeared in American Short Fiction, SmokeLong Quarterly, Barrelhouse, NPR Three-Minute Fiction, Bath Flash Fiction, and other publications.

(Next: You Will by Anne O’Leary)