Who knew that a flopped fish can offer exquisite pain and exquisite pleasure? Ri-Ri tilted her face to give herself a better angle with the mascara brush. Cludo watched her, one arm slung around the bus seat, the bill of his cap shoved to the side. The puce-colored stones of a cemetery slid across the dark frames on his face.

Are you fucking listening? Ri-Ri tsked. She held the tip of the brush still and glared. He plugs in. You plug in. He gets to touch whatever he wants. He gets to specify too. Fur-covered walls, leopard rug, a mounted deer with fucking antlers, staring at you with those marble eyes. A five-foot bear standing on his hind legs, claws raised. These fucking taxidermists are geniuses. I’m telling ya, if you touched the walls, you’d fucking come in your pants. Soft as kitten fur. That’s how this fucking website works.

Cludo’s lips sat in a thin line. He’d been without a job for three years and his uncle’s crawfish boat had just been seized by the co-op bank.

He wants me to wear all this fishing gear – gumboots, this shapeless mannish leather overall, swish the line and tackle around, make this whipping sound, and you should see how hard he got. He whips it out and I’m like, Hello!

Probably faked it. What you call it just now? His avatar.

Cludo adjusted his glasses, took out a pack of Marlboros. The bus driver up front suddenly yelled, No smoking on the bus. Cludo inserted the unlit cig back into its place in the pack.

Ri-Ri was gushing. We invest with this guy, he’s only asking for five hundred for starters. No telling what kind of fantasy we can purvey. When we sell it, he says, bunch of hedgerow investors will swarm it like piranhas. That guy I slapped with a salmon, practically genius. Way he explains it, the whole business model is like a dreamcatcher. Helps you catch your dreams, realise your sexual fantasies.

Cludo trained his gaze on Ri-Ri. She didn’t know nothing about businesses going bust, how you spend all your savings working silty riverbanks and swamp-ridden streams, pulling in a catch, and still you can’t make the payments, and then one day, it’s all gone.

And what’s your role gone be in that, business manager?

She caught the sarcasm, but she powered on. So there we were. That salmon, so silvery scaly, still jumping in my hands. I threw it back into the river. The man says, wanna go again? I said, no more fish. I hate the smell of fish. He apologized. Now how’s that for a real gentleman?

Cludo took off his shades. The bus bounced along and they bounced along with it, rocking in their seats. She was so excited by her telling that her breasts were heaving a sick beat, and Cludo just felt sick, like he’d eaten something bad.

Course not. What ya think? Her voice hiccups just a little. I ain’t cheap, you know, I got standards. Guess what we did next? Cludo looked out the bus window. Technology. Technology was driving all of them into the ground.

I told him I wanted to be an ambulance driver and he the patient. But he said could he be the medic, sit in the back. So there we were, two polyester demons, fucking each other’s brains out in the back of the cab, while the patient is resuscitated with an oxygen mask. Fuck, it was better than smack.

Cludo half-rose from his seat, and with the back of his hand, where his pinky ring sported a roaring dragon’s craggy, pointy head, he smacked her across the cheekbone. Whap! Blood seeped through the cut instantly.

Rianna gave a choked yelp, hand going to her cheekbone. When she saw the blood on her palm, she went ballistic. The hullabaloo got them both thrown off the bus. Cludo heard one of the old lady passengers on the bus berating the bus driver for not calling the police. I’mnotgonnagetinvolvedinnodomesticsquabble, he rattled.

Ri-Ri sat down on the kerb. Her ass sunk into wet grass, newly watered by a timed sprinkler. Cludo strode up and down the asphalt, and his heavy gold chain swung too like a pendulum. He held both hands against the sides of his baseball cap, his head just nodding, nodding like a moron. He hunkered down into the asphalt, diving into it almost.

Ri-Ri rubbed her cheek. That sexual fantasy is gonna like take off like nobody’s business, and the man is gonna give me a fifty percent cut for royalties. Her voice had gone all quiet.

Ok, go over that website thing you said, but slowly this time. He tried to stroke her cheek where the blood was still seeping through. She flicked his hand away.

It was not real sex, you virtuous asshole.

Cludo’s glasses snapped back in front of his eyes. Virtual sex, another get rich quick scheme, what next? There had been the pyramid scheme, the hotdog food truck, the banh mi rip-off concession stand in a foodhall. How many chances do you get in one lifetime?

Behind the waving palmetto, another bus clears the horizon towards them, hauling ass. Cludo wonders if this time, not like before, Ri Ri will get on first. 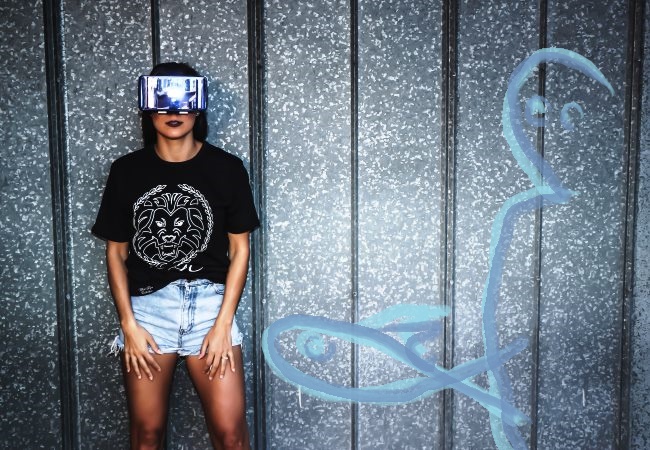 Elaine Chiew is a writer based in London and Singapore. She writes freelance articles on Asian arts and culture, teaches creative writing, and is an emerging arts researcher. She’s the editor/compiler of Cooked Up: Food Fiction From Around the World (New Internationalist, 2015). Her most recent stories may be found in Potomac Review and Singapore Love Stories (Monsoon Books, 2016) which was nominated for the 2017 Singapore Popular Books Awards. She’s won prizes for her fiction (notably the Bridport Prize) and been shortlisted in several others, including Fish, Mslexia, BBC Opening Lines, and nominated for Best Small Fictions and named Wigleaf Top 50 Microfiction.

Also by Elaine Chiew The Boat / A Compendium of Chinese Ghosts, Part I and II / Stronger

(Next: The Owl on My Shoulder by Vineetha Mokkil)

(Previous: Great Secrets of an Unknowable Past Unfurled by Marvin Shackelford)