Gramps hangs up, leaving my mom’s hand still holding the receiver and into the dead earpiece she says Well what the fuck, you filthy asshole, you’ve always been a selfish prick. Mom tells us that Gramps says don’t bother coming over because he’s going to shoot Gram then shoot himself and he’s probably doing this because he’s too much of a tightwad to take the plastic covers off the couch and the lampshades for one Goddamned day a year, even Goddamned Thanksgiving.

The whole time she’s saying this, the bunting blue receiver is out there in no man’s land right next to her head at pretty much the same latitude it was when she was talking to Gramps only now it’s drifted away from her face and she notices it after she’s done talking but leaves it there in mid-air for an extra second while staring at Kate and me as if, to make off like the whole thing was on purpose.

As soon as she hangs up, Gramps is back ringing up the line and now we can hear him shouting through the receiver, saying Never mind, forget it, I’m taking your mother out into the woods and then I’m shooting her then I’m shooting myself, why make it easy for you, useless ingrate you’ve always been, it will take months to find us, no one will know where our bodies are, I know places, I know things, I know places.

I’ll be happy there, Gramps says.

My mom punishes the phone back into the cradle. She snaps the waistband of her pantyhose against her stomach, pops her lips open, then closed, then pins her nails into the nest of her hair and starts to itch that same spot, it’s always that same spot.

Because your Grandpa is a jackass, we have to cancel Thanksgiving, she says. She looks for hangnails to snap off with her incisors.

Kate and me do-si-so our little whine medley:

Does this mean no turkey?

No sweet and sour salad?

No olives with the red thingy in the middle?

No After Eight mints?

Kate throws the final punch in about the mints even though she’s got a lifted tube of my mom’s Avon lipstick in the hungry curl of her fist behind her back and even though we know the last thing sinners deserve is expensive candy and we know After Eight mints are expensive because they come wrapped individually.

Goddamnit, no. Jesus H., does it look like I have all that sitting around? I’m not even Goddamned dressed. Standing here in my dainties, Kate. Your Gram made a nice meal and now it’s going to go to waste in her tidy kitchen because she’ll have a hole in her head. Might as well take off those fancy dresses, no sense in wearing them out or staining them. Might as well return them to Sears tomorrow, she says.

How will they get stains on them if we’re not eating turkey, Kate says quietly.

But by the time we’re done tooth-and-nailing it with the zippers, Gram has called and said that Gramps didn’t mean it and no he won’t get on the line himself and say that, but he does feel, of course he feels very bad and can we just come over and pray and eat some food, let’s just be together as a family.

It’s going to take a Goddamned hour to get you girls back into those dresses, my mom says, as Kate is desperately trying to re-cap the lipstick behind her back. I gesture, real quick like, to the red smear across her teeth. Kate flies a guilty hand over her mouth and the lipstick hits the ground behind her but my mom doesn’t hear it or see it. She’s still talking about Gramps and the dresses and what does it matter, apparently I know places, I know things, I know places, I know things my mom pantomimes in a tinny singsong voice, tipping her head from side to side though I doubt Gramps does that when he actually says it. Kate and I exchange a glance that says Guess what we’re going to hear the whole way to Gram and Gramps’s house.

Mom shouts from the edge of the kitchen to hurry up and get the dresses back on before she changes her mind and don’t even think about touching any After Eights at Gram and Gramps’s place, the last thing she needs is to scrub chocolate out of a dress we’ll have outgrown by next week and Goddamnit get dressed already. Kate and I hard-knuckle our eyes together when she gets to the part about the After Eights and Kate mouths No After Eights and her lipstick mottled teeth poke out between the syllables like toes through a stocking hole and I mouth I know. It’s ridiculous that God can be punishing Kate for the lipstick when Gramps is prepared to put a hole in Gram’s head, and plus, why did God make lipstick the exact same color as a ripe cherry and I bet there’ll be cherry-flavored something at Gram’s and Mom will not let us eat that, either. And I’m starving. By the time we get there, everything warm will be cold and everything cold will be soggy and all the olives will probably be gone.

Just before Kate and I cluster off to re-dress, I fire a quick glance to see if my mom’s looking. Then I kick the tube of lipstick into a tiny little scuttle that shoots it under the refrigerator. Kate and I share a shrug that says she has plenty of lipstick already. And we both know she’s going to return the dresses to Sears tomorrow, anyway. The lipstick will take months to find. Or maybe no one will ever see it again. Because I know places, I know things. 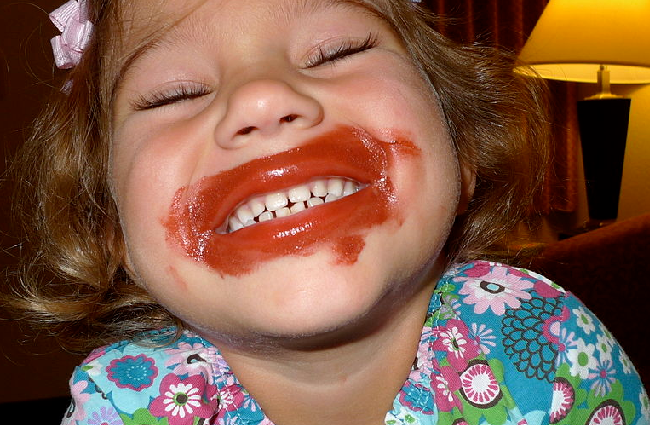 (Next: Every Key by Katrin Gibb)

(Previous: Once we firmed up by Lucas Church)