Taormina, that’s where it was. They’d walked up the steep stone steps into town and at the top, when she looked up, she’d caught sight of the snowy peak of Etna in the distance. She had expected something violent, ugly even, so its beauty, the gentle incline of its slopes, had surprised her.

The old lady at the guest house – ‘Call me Nonna’ – had shaken her head when she mentioned it, and brandished an aubergine one morning as proof of some sort of benevolence.

‘Look,’ she proclaimed, ‘see how beautiful?’

It was. A glossy, silky, purple thing. Like a strange jewel someone had unearthed on some distant planet. She’d never seen anything like it, and had been unable to tell the old woman the English name for it. So they’d settled on the Italian: melanzane.

She’d wanted to touch it to see if it felt as silky as it looked, but Nonna had held it aloft like a prize and explained – joyously, she remembers – ‘tonight we will eat melanzane al forno.’

She can still remember the smoky taste of it as it slid over her tongue and the way it had surprised Robert.

‘I thought it would taste sweeter,’ he’d remarked. ‘More, purple, you know? Like a plum, say.’

She’d wondered at that. Why the colour purple suggested sweetness to him. Why he thought of plums, while she thought of something Roman, something decadent. Dangerous even.

Though what struck her now, as she remembered it, was not the randomness of the memory, such things were bound to be unleashed on a day such as this. No, it was more the unexpected realisation that such a thing could define them.

She had always assumed their similarities had bound them to one another, some camaraderie and understanding of sorts, which had grown over the years. And yet, here it was, this tiny difference which, even as she remembered it, seemed to expand, and grow in significance.

She remembers pressing the melanzane against the roof of her mouth with her tongue, feeling it melt and coat her senses. The oily, glossy sensation – how pleasant it was, how sensual.

It was not something she had mentioned to Robert. Some uncharacteristic discretion held her back. What she’d said was: ‘Yes, you’re right, that smokiness does seem odd, doesn’t it?’

And he had nodded, and kept on eating. Wiping his plate clean with chunks of bread. Something he would never have done back home.

That night, in bed, she’d caught the last smoky remnants of it on his lips as he’d brushed a kiss goodnight, and she’d touched his arm in response, but he had turned on his side and whispered, ‘goodnight.’

Though now, with Robert gone, she could do it, if she wanted to. Fork those delicate textures into her mouth again and not have it feel like a betrayal. But she knows she won’t.

And she laughs at this, at how ridiculous it is, and wishes Robert could open his eyes, just for a moment, just one more time, so he could ask her – ‘what’s so funny then, Cath?’

And she could say to him, ‘do you remember Taormina? That dish Nonna served us?’

‘How could I forget,’ he would reply.

Only he wouldn’t, would he?

Looking at him as he lies there, she notices something in the stiffness of the lips; the straightness of the line, the rigidity of it, which suggests he would remember none of it. Melanzane al forno would always be wrong-tasting. Something to be forgotten. That volcanic oddity they had tasted once. Then never again.

‘When it was exactly, we said goodbye to one another?’ she asks him.

It wasn’t today, here in this cooled room. It wasn’t just then when she brushed her hand across his forehead, just as the door opened and she heard a discreet cough behind her, letting her know it was time.

No, it had happened long before. The moment she’d pressed her tongue to the roof of her mouth and tasted smoke.

‘Do you need a minute longer?’ someone asks.

They have indulged her with quiet and respect, allowed her to take her time, though what they would think, if she was to reveal the memories which have preoccupied her, is anyone’s guess.

Or is it possible to confound such people, she wonders.

‘No, I’m all done,’ she says and he opens the door wider as she turns to face him, his stance formal, like a sentry, as if he is telling her that there are other people who will take over now, that Robert is no longer her responsibility, is not hers in any way now.

She stops at the door and thanks him, not meaning to ask it, but it comes of its own accord.

‘Have you ever been to Taormina?’ she asks.

And he is perplexed, of course, the veneer of solemnity falling away, just briefly, as he processes this question he is not expecting, this question he has never been asked before, not in all the years he has been conducting such business.

And she nods and tells him, ‘no, me neither, me neither,’ and leaves it at that. Just walks towards the lobby where she can see the dark shadows of the mourners gathered behind the frosted glass doors, shapeless and vague, like memories that are already fading to nothing. 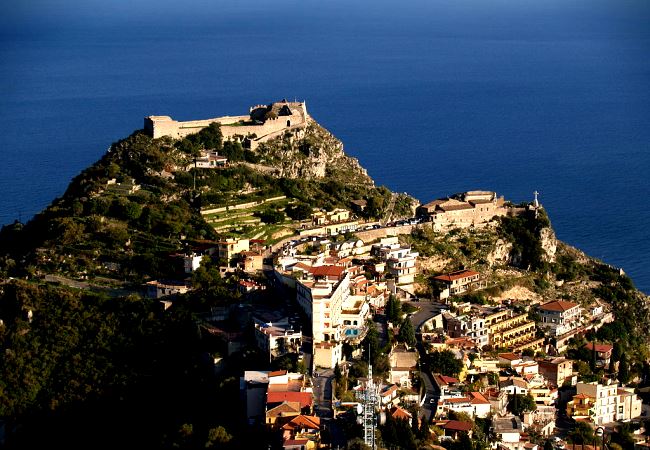 Jennifer Harvey is a Scottish writer now living in Amsterdam. Her writing has appeared in various magazines and anthologies in the US and the UK. She is a Resident Reader for Carve Magazine and when not writing can be found sauntering along the Amsterdam canals dreaming up new stories. You can find her online at: www.jenharvey.net and on Twitter at @JenAnneHarvey.

(Next: A Basic Foundation for Riley by Ryan Jory)