Occasionally when Jen glances in a mirror she sees the reflection of Carol, an unattractive colleague she once had. Dark smudges under her eyes, pale blotchy skin, limp hair, a double chin. She has to shake Carol from her face and hair, and remind herself to make more of an effort. She wants to look together, professional, and she applies make-up carefully, layer upon layer, a natural look that’s anything but; moisturiser, primer, foundation, blusher, concealer, powder, invisible lip-liner, gloss, mascara, eyeliner. At least look groomed, she thinks. At least look like you care.

At the psychiatric hospital they want to know what makes her daughter the way she is. Jen would like to know that too, of course. Pepper (originally Patricia after Jenny’s mother, then Peppermint Patty for the Snoopy character, now just Pepper, which suits) seems to have a well of unhappiness. Things get muddled; teenagers are difficult. Jen had expected it. Not this though. Not being spat at, hair pulled, screams. Not police officers and knives. Blood. So much hate. So much love.

A nurse, a doctor, a therapist, someone, will ask her questions, make her begin again to tell the story of how and why and when. Jen is always embarrassed by her tears. They slide down her face and ruin her make-up. Her nose reddens. She scrabbles for tissues and feels her composure disappear.

“We were at home, sitting on the sofa together. Pepper wanted to watch EastEnders, I didn’t. I thought I should take a stand. People… you… doctors… say I should be firmer with boundaries.”

This is the place her voice cracks.

“I said no. Pepper was… furious, she stood up, walked behind the sofa and spat on the top of my head.”

Always that question. And Jen hears, “What did you do to fuck things up so badly that your daughter attempted suicide?”

She’d carried on watching the TV. Not watching, facing. She’d switched channels and made a point of sitting, clamped lips, not moving even when she heard the thudding of overturned furniture. Not moving when she heard the smash of glass. Not moving until the blessed silence prickled her and she walked, slowly, up the stairs.

The senior psychiatrist is a woman dressed in a grey skirt suit, white blouse. Her hair is short, practical, but she has flamboyant parrot earrings dangling from her earlobes. She reminds Jen of the detective in one of those LaPlante series, and on that flimsiest basis Jen trusts her. She speaks to Jen as if they are both professionals and Jen is grateful for the courtesy.

“I see no signs of mental illness,” she says. “Your daughter is very bright but has extremely heightened anxiety. She’s sensitive and naturally the influx of hormones aren’t helping. She feels a lot of pressure at school. Some of her peers have been unkind, there was a falling out with a friend.”

Jen wonders how on earth she didn’t know about the friend. She always asks how Pepper’s day has been, of course Pepper rarely answers, and perhaps Jen rarely listens. Anti-anxiety medication and a gradual return to school is mooted, a couple of nights at home, then a few back at the unit. Pepper’s school have been great, they are fully on board with it all and will attend a review meeting the next week. Everything sounds eminently sensible and do-able. There’s no big drama here. What has felt like the very worst of all things is calmly shrunk by this capable woman and her reasonable diagnosis.

Most of the staff in the unit are young, the kind of hipsters troubled teens are expected to relate to. They have piercings and tats and wear band T-shirts. The atmosphere is that of a youth club and the staff often remind the service users that it’s a hospital. Patients are expected to attend the education unit during the day. After school there is pool, basketball, music, an x-box, flat screen telly. Jen worries about Pepper falling for one of the brooding boys, or being recruited by one of the tiny anorexic girls. When she sees Pepper and holds her close she smells unfamiliar.

The nickname sounds ridiculous. They are being observed, casually, by a bearded guy ostensibly relaxing in a huge blue armchair.

“Fantastic.” Her voice slurs over the sarcasm, a result of the medication.

“You shouldn’t have stuck me in here then.”

“The doctor says you can come for a home visit this week, maybe go back to school if you’re up to it?”

“Whatever it takes to get out of this dump.”

Jen takes that as a win.

In a few months Jen will be working lunch time shifts in a local pub. She will approach a customer only to realise it’s someone familiar who she can’t quite place. She will smile and say, “Hi, how are you?” before noticing the dangling parrots. The psychiatrist will order an orange juice and a lemonade and take her drinks to a far table as if they have never met. She will be so convincing, Jen will wonder if she has genuinely forgotten. Jen will watch the psychiatrist and her companion, a man in a navy suit, and wonder what they are saying, what their relationship is. She will go into the staff corridor, slide down the wall, use the breathing techniques she has learned with Pepper, swipe at tears with the back of her hand and smudge black streaks of mascara across her face. She won’t see the psychiatrist again, but it will take sixteen months before she stops looking for her everywhere she goes. 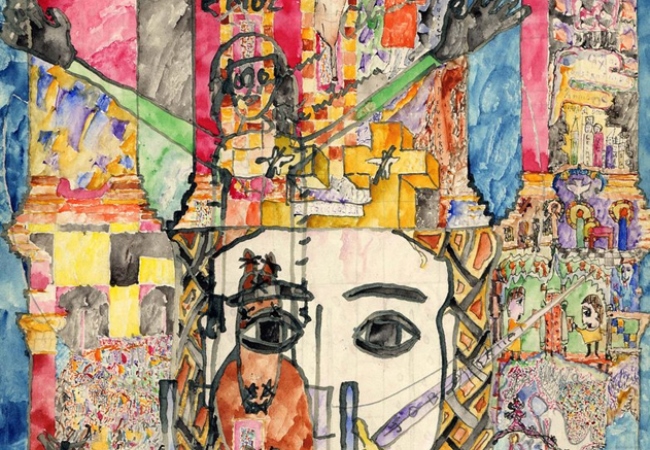 Sara Crowley has had fiction published in many lovely places including PANK, Wigleaf, FRiGG, 3:AM and The Irish Times. Her novel in progress was runner up in Faber’s Not Yet Published competition. She’s Managing Editor of The Forge Literary Magazine, blogs at saracrowley.com, and appreciates you taking the time to read this.

(Next: No big movements by Noa Sivan)

(Previous: Teaching My Daughter to Drive by Paul Crenshaw)