Jessica comes out from the little en-suite bathroom, teeth brushed, hair down, nightgown falling to her ankles. The more her father drinks, the more she sleeps over at Molly’s. She’s talking about homework or homeroom or something.

Molly’s lying on her belly in bed, watching her. She’s pretending this is their bedroom, instead of simply her own.

“I’m fine,” she says, but looks away as Jessica joins her on the bed.

“I wish you wouldn’t hold me at arm’s length. Especially now.”

Jessica shrugs, embarrassed. “Now that the world might end.”

Molly doesn’t fight the eye-roll, turning to lie on her back, crossing her arms to keep her breasts from slumping into her armpits.

The bomb is all anyone talks about now. And even when they don’t, it’s only because they’re avoiding talking about it. Endless PSAs about ducking and covering. Like turtles in their shells, their teacher said. But Molly knows perfectly well that shells aren’t saving anyone, no matter what they’re made of. She’s seen turtles killed before. Her boyfriend hit one with his car last summer: its carapace cracked into sections, spilling blood and a string of soft, white eggs. Turtles aren’t going to survive a nuclear blast, and neither are they.

“Jess, nothing’s going to happen. My dad’s been harping about the End of Days for so long now — sometimes I wish he was right just so I wouldn’t have to hear about it anymore.”

“Don’t say that.” She twists her dark hair into a half-hearted braid. “And anyway, it isn’t just your dad anymore. The whole world’s talking about it. Sometimes—” In a sudden fury, she shreds the braid back into pieces. “I don’t know. Sometimes I lie up, staring at the ceiling, and all I can think about is that stupid prayer: If I die before I wake… If I die, if I die, if I die — but I don’t want to die.”

The tears startle out of her, surprising them both. In a rush, Molly’s sitting up and cradling her as she might a frightened dove, stroking her back, her wings.

“You aren’t going to die,” Molly whispers, kissing her hair. She smells like toothpaste and cool evening windows. “I won’t let you.”

Jessica shakes her head. “If the bomb drops, no matter where it drops, we’re all going to die.”

Jessica sits back up, the two of them cross-legged and facing each other. A pair of white nightgowns and washed faces, their hair loose around their shoulders.

“You’re my best friend, Molly. You can tell me anything.”

But Molly knows this isn’t true. She hasn’t been a virgin for a long time, and something about this status lets her know: not only is Jessica a virgin, she likely still doesn’t even touch herself. She may not even know what it feels like to come at all.

When they were seven, Molly discovered the wonders of tucking a pillow tightly between her thighs and rocking until the pillow formed a hard, miraculous edge. She told Jessica about this fine discovery, eager to see if it worked for her as well, if maybe this was some good news they could share with everyone. But the next day at school, Jessica had a purpled cheek, wide fingerprints yellowing around her arm. She’d whispered only, “Daddy says it’s a sin. It’s something wicked girls do.”

So what would she say if Molly told her the truth? If she admitted, “I’m not afraid of nuclear war because all I can think about is the curve of your stomach. How the back of your head would feel in my hands as I kissed you. I can’t think about anything else. There’s no room for war inside me.”

But what if she’s right? What if it is the end of the world? And this gives Molly the stupid courage necessary to touch Jessica’s cheek, to lean in close.

Jessica freezes, but Molly doesn’t stop. She presses her lips to Jessica’s, presses her body to hers. She wants Jessica back in her lap. She wants under that nightgown.

“Molly?” Jessica whispers, and though the question’s uncertain, her body no longer is. Her arms lock around Molly, as if holding on for dear life. As if frightened that any more tentative touches might send them both flying away like dandelion fluff.

Molly pulls at Jessica’s nightgown, up over her middle, her head, until it’s only Jessica, the birthmark on her hip, the curling little hairs around her pink panties, her pink nipples. They’re so much larger than Molly imagined. No pennies or nickels for her. These are medallions. Licking them, making Jessica gasp —

“Shhh,” she whispers. “Or my parents will hear.”

And something about this turns Jessica inside-out. Revealing a creature utterly new. Her hands fly here and there, her mouth — she doesn’t know what to do. It’s so excitingly clear that Jessica has no idea what she wants first or how to take it. She glances up like a starlet in a romance, licks her own lips in this ridiculous beautiful way.

“Molly,” she rasps, and Molly can all but hear Jessica’s pulsing thought: Smoky. Make it sound smoky. “I want to see you, too.”

It’s hard to think. The shameless way Jessica moves beneath her, as if no one’s ever punished her for wanting something beautiful.

“This is how you’ll know the world isn’t ending,” Molly says, slipping her fingers beneath those pink panties. Jessica’s fingers bite into her shoulders; she looks frightened, as if she’s only now realizing that something immense is about to happen. “It can’t end yet,” Molly whispers, kissing her as they float up from the bed together. “You still haven’t even seen me naked.” 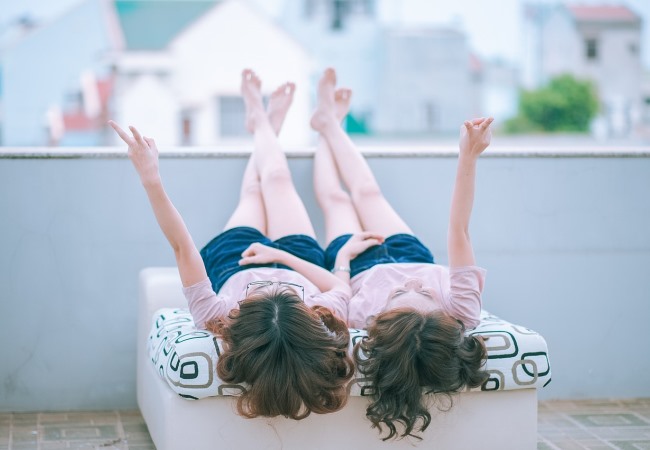 K.C. Mead-Brewer lives in Baltimore, Maryland. Her writing appears in Carve Magazine, Cold Mountain Review, Fiction Southeast, and elsewhere. As a reader, she loves everything weird — surrealism, sci-fi, horror, all the good stuff that shows change is not only possible, but inevitable. For more information, visit kcmeadbrewer.com and follow her @meadwriter.

(Next: The Pool and the Body Parts by Allison Wyss)

(Previous: Life, Without by Lynsey Morandin)