Menkin didn’t like a wet coaster. He preferred to set his mug of beer on a bar rag folded in quarters, so he could keep the space around him clean and dry.

Hal lifted his baseball cap and scrunched his hair between his fingers when Lila wasn’t looking. She’d once told him he looked like a young yachtsman.

Lila considered Hal her best friend. A man didn’t have to drive over an IED, like her son had, to be able to understand a little something about trauma, and how hard it can be, getting the trauma second-hand.

“You’re all messy,” she’d said, fluffing his hair with her fingers. “What’s the word? Disheveled. Like you been out in the wind all day.”

Menkin avoided eye contact with Lila, and not just because he was friends with Hal. It seemed to him that Lila was the kind of woman scratching for a husband, and he didn’t want any part of all that. His Jenny was gone and that’s all there was to it.

Hal’s hair was thinner than it had been just a few months ago. He remembered his father at this age, balding and with a hard bulge of belly, dead of a heart attack less than a year later.

“See, your own legs don’t get blown off but they might as well have because that bomb blows your life apart too. Makes you half your old self, you know? Changes how you think about people, and the future, and what’s good and what’s brave, and what you thought you needed, and what you actually do, and don’t.”

Hal had never married, never had children — and that had always seemed right before. For years, he’d listened and nodded as people complained about being beholden, losing themselves in marriage, living under someone else’s thumb.

It seemed to Lila that Hal was the perfect friend: just worn-out enough to know how to listen. Sometimes she even let him flirt with her, but only to the point where he wouldn’t feel embarrassed afterwards, and they could still talk, like normal, tomorrow.

Menkin ordered one more. Jenny had scolded him more than once for drinking one-too-many beers at this very tavern, and driving right off the road. But he couldn’t help but get caught up looking at the deer — the same big eyes, and same auburn hair, that she had when she was young.

But lately, after a long day of drinking, or when a twinge hit him just right between the ribs, Hal’s strength thinned. And in spite of himself, he wanted things: A sad, legless Jeremy to worry over; a fat, domineering Jenny to miss.

She sure didn’t need more damage to look after, though, and a man with needs isn’t really what you want next to you watching the game, or in the car on the way to the Veterans’ Homes, and definitely not upstairs in bed.

Menkin wiped down the space in front of him again, re-folded the rag, and set his mug back down gently to watch it. There was a moment in each glass, about halfway down, after the foam had settled but not yet dissipated, when the bubbles spread themselves out in a uniform layer, all the way around. He didn’t want to miss it.

Now, Menkin… Menkin was the kind of man who seemed like he knew how to be a husband. Had been a husband, after all, and had that calm, “husband” reserve about him, like he’d probably rarely come pawing. Like maybe, just maybe, he’d never need nothing from you at all.

Hal had never done this before, but today he set a hand on Lila’s thigh and said, “Does Jeremy know what a wonderful mother you are?” But Wreck me, he thought. Shred me. Blow me to pieces. 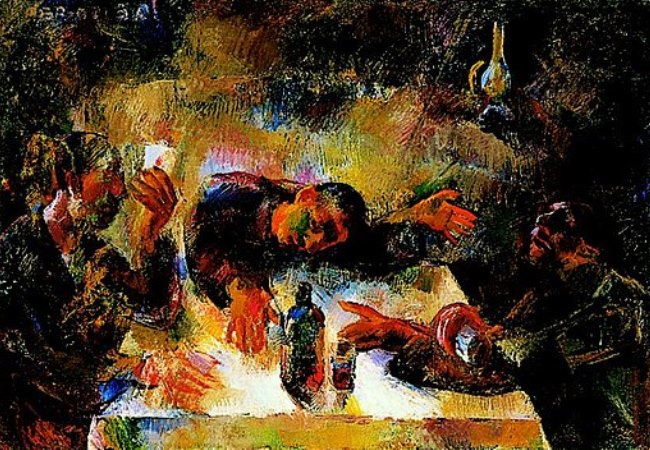 Molia Dumbleton has been awarded the Seán Ó Faoláin Story Prize; the Columbia Journal Winter Fiction Award; the Dromineer Literary Festival Flash Fiction Award; a Kenyon Review Peter Taylor Fellowship; and a Susannah McCorkle Scholarship to the Sewanee Writers’ Conference. Her fiction and poetry have been published in New England Review, Kenyon Review Online, The Stinging Fly, and others. www.moliadumbleton.com.

(Next story: Little Sure Shot by Andrew Wehmann)

We have a special call for submissions currently running, too.