Of Leo’s time run away to Chicago, he remembered only beginnings. Once, in a suburban forest-preserves parking lot, for instance, he had looked across the street at three men in business suits and overcoats. From their white fingers dangled stuffed McDonald’s bags. The shortest of the men had, too, a beverage holder, steam rising from the plastic lids. Enough for everyone, Leo thought. He could tell by their purposeful body language that they were going to jaywalk.

Beyond the parking lot the snow had melted off most of the field. He knew the businessmen were headed for the picnic table. They would cross through the lot where he was unauthorized in a parked car. Stupid choice, he thought. Nothing new. He’d picked that car because it was the only one unlocked. Watching traffic always calmed him. He could stay until his toes thawed, until the owner showed. But three men in suits wanted the picnic table. He dry-heaved and pictured the men being hit by a semi, bags flying from their hands with the food untouched.

The men were no good at crossing, as if they had never done it before. He tasted saltines. It was too low a car to belong to any guy in a suit. But they would see him there, a pimply streetkid, and they’d think he was jacking off. Three assholes who could jack off anytime in the privacy of their own offices, in their business-travel motel rooms or their company cars. They would see him and crack a joke. He yanked at the button and unzipped. He’d gone without so long it was a shock, like being touched by a girl, and he was almost that grateful. He imagined the girl. The men had crossed onto the cement and were talking sales figures. “She’s up half a mil from last quarter.” Then a spitting sound. “Because they gave her the Near North, what did you expect?” His body had gone dopey. Hey mister, spot me some cologne? The last one saw him, gaped for a second, and skittered on to catch up. “What’s the matter, pipsqueak?” Pipsqueak said, “Fuck off.”

The door’s lock was golf-tee shape, and he hadn’t pressed it. A light-green plastic Buddha sat in lotus over the radio. The last time he’d touched a girl, she’d said, “Cut it out, it’s like eighteen degrees,” and she’d pulled her little skirt straight and held the hem down. If the car’s owners were Buddhist, he felt bad. If they weren’t, he didn’t.

The taste of saltines had started to annoy him. Okay, I’ll stop, he thought, but he didn’t, and he spurted all over the glove compartment, panicked, and fell out the door. One of the salesmen laughed; he didn’t know if they’d seen him. He wasn’t from the area. He didn’t know where anything should be. No one followed him into the woods. You could follow a rational person, a squirrel, a dog, but not an idiot. The crust on the snow collapsed where he stepped. His legs seemed to detach themselves in their movement. Crunch, crunch, crunch, and every word was gone. 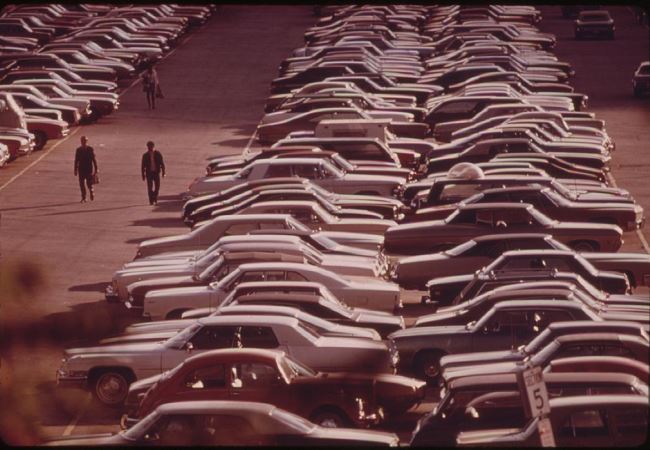 (Next story: Berlin by Thomas Kearnes)

We have a special call for submissions currently running, too.