The Smorgasbord of Yum

The only reason we’d stepped into this hole in the wall was because it seemed to match our own combined individual/together misery, and for some coffee. Who would have guessed that there was no way to order off a menu, no a la carte, even for a soft drink, even for a measly cup of Joe? By design, we were told. It was the philosophy of the place. Everything or nothing! But for one low price, you had unrestricted access to the smorgasbord, including to the giant, industrial grade coffee urn, which was likely filled with the cheapest possible unethically-traded roast brewed hours and hours before. Best coffee in the world, she joked.

So of course we did it. Why not torture ourselves further, throw some more money down the drain for an awful cup of coffee and maybe a greasy bite to stave off complete malnutrition? Apparently their business model was effective with people like us, the only type that would even think to patronize such an establishment, to accept such rigid take-it-or-leave-it requirements.

But then we went over to the depressing hot dog stand carts of food, clutching the faded lime green plastic plates from our table, and smelled something unexpected. Rather than rancid and sickly sweet, there was spicy smoothness, pleasant scents that initially confused us. Rather than brown and tan and fluorescent pink, we saw that the serving platters were filled with fresh and vibrant colors that actually existed in nature. And then, once we had ladled our selection of what was clearly not slop onto our plates, once we’d walked back to our grimy table, looked at each other with raised, twitching eyebrows, and finally lifted our dirty forks to our mouths, our eyes widened into mirroring reflections of What The Fuck.

It’s not like we were foodies. Just a pair of college-educated junkies teetering on the edge of what to do next, whether alone or together, or quite possibly neither, without much appetite for anything but smack and Winston Reds. But this food! I’m not sure it helps to tell you what was in it. Normal ingredients really: whole grains, vegetables, beans, chicken and fish, noodles, herbs and spices. Nothing fancy, but with layers of flavor that tasted so right, so balanced and nourishing. We kept going back to make sure we’d tried everything, every perfectly constructed simple dish, because we somehow understood that this would be our one and only time here, for how would we possibly remember where to find such a nondescript, outwardly vapid place, with no sign above it, only a window looking into what we had first thought was a laundromat? Did it even exist or was it just something I dreamed one night time, trembling with the super flu? I have no one to ask anymore.

And when we finally got to the coffee, it was of course the best cup either of us had ever tasted, the best coffee in the world, we agreed, and both of us knew that come what may in the days, weeks, and months ahead, at least we’d have the memory of this simple slice of greatness courtesy of some underachiever genius of a chef who belonged in a different world than ours, far far away from this neighborhood and clientele, from people like us, but who miraculously was here; and all for $9.99 apiece, at this funky seedy haven that had no name, as far as we knew, so we brainstormed like crazy until — I shit you not — we both, in perfect unison, came to the same conclusion, together exclaiming: “The Smorgasbord of Yum.” 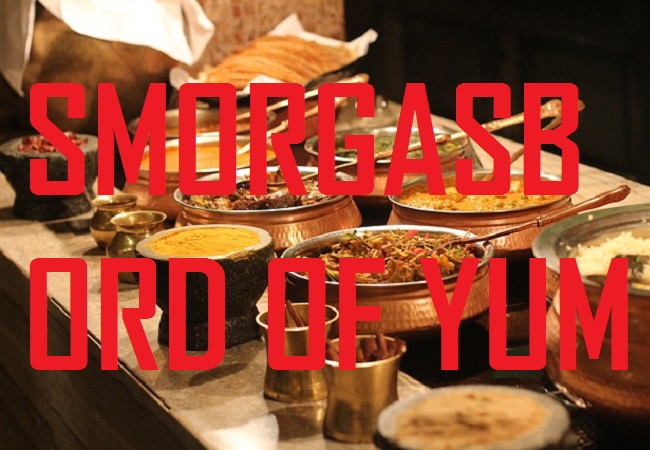 Louis Wenzlow’s short fiction has appeared or is forthcoming in The Airgonaut, Cease Cows, Cleaver, Eclectica, Fjords, The Forge Literary Magazine, Jersey Devil Press, The Molotov Cocktail, and other places. He grew up in suburban Chicagoland and now lives with his wife and daughter in Baraboo, Wisconsin.