All Eggs, No Birds

The announcement came through Channel C after an hour of high-alert in D4 on account of a suspicious aInvasion, accompanied by an anime episode of Tigers in Water, which went:

When this globe-shaped egg hatches there will be the one too many cosmic beings the space cannot contain.

So for now, preserve and savor, wrestle and toy with these head-shaped eggs.

That is either a prank played by interDimensional pranksters or a cipher that needs some deciphering or both. Being a trainee in D3 Culture Police (Media Unit) my duty is only to report this broadcast anomaly to the Ministry of Broadcast Regulations. That I have already done. Then this (half-academic no-kitsch of a discourse) I have scribed down on my theoretically offline dIary (for our eyes only) while keeping an eye out on the curly, twitchy camera eye that did not look like it was keeping its eye on me but surely was. This string of words will turn into an army of emojis at the first sign of hack, so there!

Excepting Robirds, all birds lay eggs. Some mammals lay eggs, too. While female of the sapiens produce eggs they do not lay them (unless freezing eggs counts as laying them). We postsapiens, some believe with mock-awe, lay eggs but that is only a refrain (or a legend) or a true lie. Now, to pick up after The Science of Egg, farm-based eggs (or Feggs) are a luxury given the controversial takeover of it by modified eggs (or Meggs) that, I quote, merely satiate the palate and do not sufficiently nourish or in some exceptional cases over-nourish. Postsapiens can survive solely on eggs if we so choose to (so the refrain!), Feggs on good days and Meggs on bad days. The politics of egg surfaces only when it is dissected a bit so it behoves certain indulgence.

From its shell to its core the egg is worth every fiber. Need calcium, you got it; need protein but vitamin also, you got it all in a 40 rupees apiece Megg or Fegg at rupees 90. Postsapiens only require four eggs a day to function unlike sapiens (with more demanding physical systems) whose range of cuisines is astounding. Some folks get rid of yolks (for religioscientific reasons) preferring only the glair which while colorless turns white when cooked. The well-off sapiens in D3 crave for brown-shelled Feggs, habitually; folks in D4 for white-shelled Meggs and others like me (in both D3 and D4) crave for whatever we can lay our hands on. Craving itself is not a problem — pop scientific newsfeeds that pop up every day telling us what is healthy, tell us every other day not to feed on the very same foods and now for us they are reduced to mere quasi-religious curiosities — but there is an obsession inherent in it that extends also to bodies, spices and whatnots.

If there is anything cryptic in head-shaped eggs to decipher it is that it points to the refrain brown sugar, mates! Brown sugar mates (it goes) are those folks that misidentify their identity; they are the folks that look at their pupils and dark hairs in the mirror and think they want black & white salts to salt their Feggs.

Families still provide one extra egg for the female child (which encourages the male child to learn to steal evasively from a tender age) expecting when the children grow up they will be healthy enough to work for D3.

We have already broken through to the once hypothesized higher dimensions. Things changed (yes) but new needs and livelihoods crept up. We learn very quickly and because we can learn quicker than sapiens we are expected to gather more and more pointless knowledge. Beings have bodies therefore the need to eat (even if it takes only a few fruits or eggs), the need to work in order to eat, invent to work and so on. D3 having colonized now voids in space (by rumors not without truth), the nonbeings in D5 pay — with cosmic energy that fuels dumpster ships — just so to occupy their empty spaces. This makes the mention of cosmic beings utterly archaic.

For polychrome-bodied postsapiens this — head-shaped eggs — would not mean much but for sapiens it is a stab at their very baffled being they would rather take shelter in a twisted grey hole than face it. That and the space cannot contain which picks their body and food politics at its dirtiest and exposes it. For this thought (if I put it out) I will get called out on. For this reason (I must assume) the attack is aimed at sapiens by a pack of postsapiens but I solemnly swear I am not the author or part of this half-cooked diatribe.

(Under the existing culture scrutiny minizines offer a writer rupees 160 simply to submit a story and 16,000 rupees to put it out (and megazines offer invisible handcuffs or slick ankle bracelets and this is what passes for that great thing called choice). The writer would be bound to fly off to some no sapien’s space indefinitely is a different story.)

The best be prepared! caveat is pedestrian at best. Such foreshortening as this (once passion-fuelled only the proverbial engine of religion) now also fuels Science.

Prank or cipher, this part-piercing claptrap (that is sure to have half the families squirming) is very much an assault on the prevalent claptrap. We are all (sapiens and postsapiens of many hues) fussy about everything that is eggs — be it the colors of their shell, the shapes we want them to be, the quality of their contents and what have you — but (as a Militant Vegan once put it) barely anyone gives a hoot that eggs contain especial lives inside. This is not what life should be reduced to in our Uniprose (an otherwise splendid place where Science is (still) vying hard to replace psudoreligioscience without it wanting to become yet another religion. Where also dusts and disputes never settle, families weather storms of nurture, nanoBots combat pathogens, dimensions interpenetrate, birdsongs never cease. We must maybe just let the eggs hatch beyond the ordained limit. 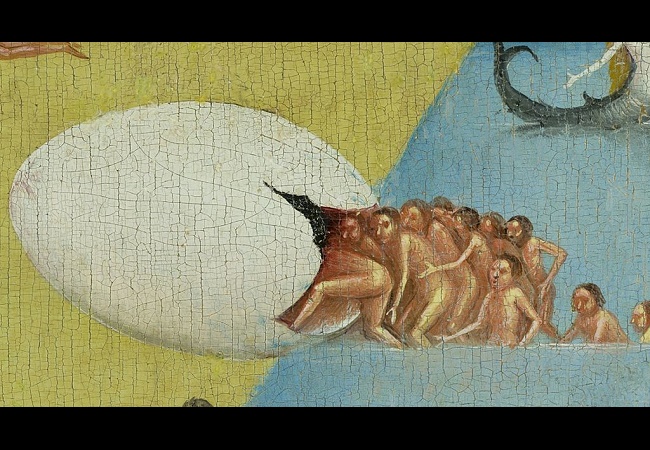 (Next story: The First Woman on Mars by John Minichillo)