I Have My Mother’s Eyes

When I was fourteen years old Mother sat me down after my brother had been sent to bed and placed her hand on my shoulder.

‘I’ve already covered it at school, like years ago,’ I said and brushed her hand away.

I had told my brother earlier in hurried whispers how walking home, my school jumper tied around my waist to try and cover the yellow and maroon plaid of my school skirt, a man had shouted at me from across the road. He’d said all the bad words Mother told us never to say and other things, things that made me blush and wish the ground would swallow me up. My brother of course told Mother as soon as we sat down for dinner. The glee with which he said it sentenced him to an early bedtime, no pudding, no TV.

‘Listen, the women in our family are different. You have to be careful now,’ Mother said and reached for my hand and held it so tight I couldn’t pull away. ‘You’re young, so much younger than I was when it first happened to me. But once they start that’s when everything changes.’

I frowned. Mother removed the dark sunglasses she wore all the time, even inside at night when all the lights were off; had done ever since I could remember. Her eyes were a pale steel grey. Beautiful and ordinary.

‘We’re different,’ Mother repeated and told me of a curse from long ago when gods were real and a young woman was violated in the house of a goddess and a burden forced on her to protect others from the wrath of men. She told me how we were descended from that same woman. That any person with evil in their heart could not look us in the eye without engineering their own destruction.

‘We are a weapon my daughter,’ she said. ‘And weapons must be made safe.’

Mother reached into her bag, pulled out a glasses case and handed it to me. Inside was a pair of sunglasses, two perfect black circles.

‘One moment of hatred is all it takes,’ she said.

‘But isn’t this all backwards,’ I asked. ‘Why do we have to be punished?’

I had no reply to that, could only watch as she plucked the sunglasses from their case and pushed them onto my nose, scraping behind my eyes.

She did not do it unkindly.

I did as Mother wished and my teenage years passed by beneath the filter of my dark lenses and I inched myself into an uneasy adulthood. There is always the lazy teasing at every new job or party: celeb wannabe, just how ugly are you, are you blind or what? I mutter about congenital eye disease and light aversion. It lasts a few weeks before people lose interest, we can accept anything if it becomes familiar enough.

I know better now how the world works, the currency placed on how a woman looks, what she says and what she doesn’t. How the world will try to reduce her to one single thing, try to twist her self-worth into something shameful. Mother made her choice to keep herself screened off and separate from the world and she let me follow in her wake like a shadow draped upon a shadow. I can understand how this might have seemed like her only option.

It was not the first, or the fifth, or even the tenth time it had happened since that day in the road when I was fourteen. The man was unremarkable, boorishly predictable in the pathetic, insinuating words that slithered, snake-like from his lips.

I thought of Mother pushing the dark glasses onto my face and fixing them in place, the tiredness she must have felt, the sadness. But I cannot sacrifice my freedom any longer. I have lingered too long in the shadow of her misplaced fear.

I pulled off my glasses and snapped them in two.

My eyes found his and held them there. I stared long and hard.

It didn’t happen like I thought it would, no instant transformation of flesh to stone, instead it creeped upon him slowly, up from his feet as if the pavement slabs themselves had poured their concrete up and over him. It flowed, languid, along his legs to lock him in place. He had the decency to look scared then, to tug at his legs in a futile attempt to free himself. When his chest was turned to stone it stopped his heart of course. Quick; humane.

Once home I sought my reflection in the hallway mirror and looked deep into my own face unadorned for the first time in years. Smiled. My eyes are a deep stone grey, like Mother’s, but brighter. 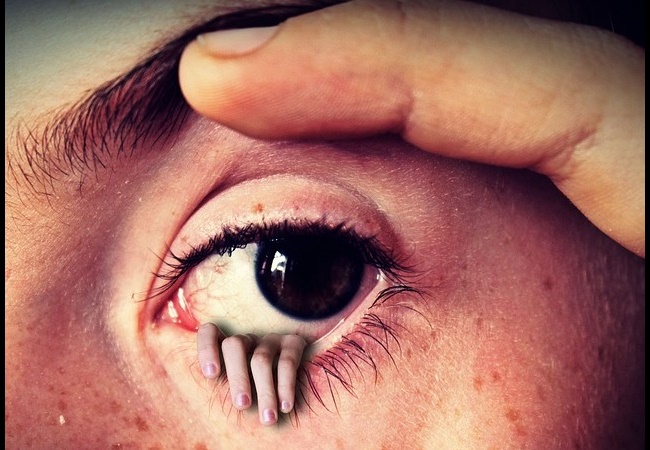 Elizabeth Lovatt is a proud graduate of the Write Like a Grrrl programme run by For Book’s Sake, the website that champions writing by women. Her flash fiction and short stories have featured in Popshot Magazine, Halo Literary Magazine and Severine Literary Journal. Elizabeth currently lives in London and works for Tate. Follow her on twitter @elizabethlovatt

(Previous LADY MONSTER story: She Feels Self-Conscious about Her Teeth by Meghan Phillips)