When I was younger and living in London, I dated a French girl who dreamed of one day being an air traffic controller. I say ‘girl’, because we were both still basically kids. Neither of us had much money, so we spent our days wandering around Hyde Park. She was amazed that planes were allowed to fly over London, as this was forbidden in Paris, where she came from. Every time a plane flew overhead, we’d stop walking, so she could watch it and picture herself at Heathrow, bringing it in to land.

Sometimes we had enough cash to buy a drink, and she taught me that you must always keep eye contact when you touch glasses. If you don’t, you’ll be cursed with seven years’ bad sex.

Had I known back then how much fun bad sex could be in the right hands, perhaps I wouldn’t have spent the many years since forcing drinking partners to look deep into my eyes!

This is an issue that will go down in jellyfish history. Jellyfishtory.

Best of the Net 2016 nominations

Next month is business as usual. Though not exactly! We have our 100th ever story, by a crazy-good writer, and a bunch of great stories and writers on top of that. The bar has been raised so high now.

We’re still accepting submissions – always, constantly – but you really must send us something great or you just won’t be able to compete with the pieces we have coming through. Copy and paste into the body of your email and send to jellyfishreview@outlook.com. Feel free to add a cover note! 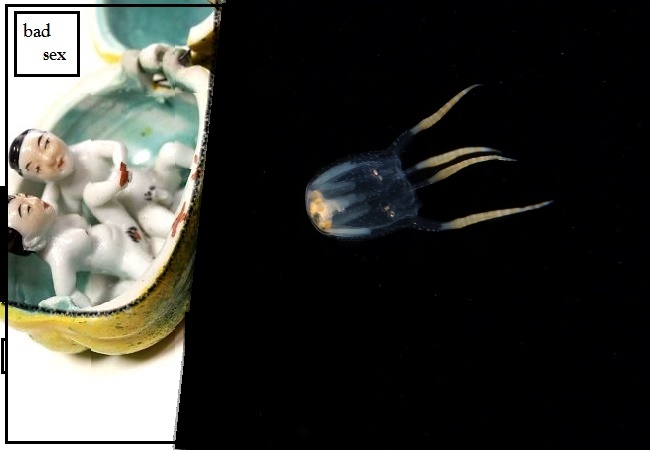 (Picture derived from this and this)

When it comes to sex, most male jellyfish release their sperm into the water through the same hole that serves as mouth, anus and reproductive channel. Females take up the sperm to fertilize the eggs. For some species, this means eating the sperm.

One distinctive exception is the copula sivickisi. These jellies have a courtship dance, in which the male entwines his tentacles with the female’s. He drags her about a bit, then pulls her in close. He shoots out a sperm packet, and smears it on the female with his tentacles. They separate, and she eats the sperm. Both parties go on to mate with other partners, and the female stops dancing when she’s full to bursting with sperm. The male stops dancing when all four testes are thoroughly spent.

All in all, I think I prefer wandering around Hyde Park, watching aeroplanes go, learning French!