The Sound that Angry Angels Make

Forty black-haired heads, obediently bowed in rows, accompany the intoning teacher’s afternoon geology sermon – eruptions and aftershocks, faults and fractures – with the furious sound of pens scratching paper. Akiko, a storm’s eye, sits pulling out eyelashes and dropping them onto her desk. An errant deviant, skulking under tables inspecting underwear, peeks up Akiko’s skirt. He screams and hits his head, hurriedly trying to surface and erase the sight of flaking scabs and scars he saw written into her uncovered inguinal skin.

From the depths,
the pealing crack of breaking earth,
is heard amongst the heavens.

Tsunami warning sirens wail. The children grab what they can and run. By the door the teacher waits, hurrying her students into the screaming frenzied flow pouring from other rooms. Ready to run, she turns and sees Akiko still in her seat, arms defiantly folded, lips pursed, and fringe hanging over her face… awaiting a different kind of deliverance. She yanks Akiko up and runs with her along the corridor. Outside, the shouts shift. The flow reverses, following the teachers’ points back inside the building. From the four-storey roof the students, even Akiko, gawp as waves are seen rushing towards them.

Across the land, the waves devour:
our feeble gains against Leviathan lost.
How deep the sting of servitude
to see the pride in our designs
destroyed
by the dragon’s indiscriminate tail;
our pleading prayers not even worth its pity.

The horror unfolds: roaring, crushing wave on wave assaults the school. Across the courtyard, the two storey art-block is submerged to the roof. A solitary figure, Akiko’s art teacher, waves desperately. People shout advice as the water rises but Akiko, a storm’s eye, stares willfully at the waves: thoughts of photos piercing her mind. How flattering to be chosen, and how thrilling it was to pose. The expensive bag she bought with the money elicited envy, but the cost of keeping the photos from the internet was more. Six months of lunch hours spent exchanging shame for silence on film had aged her a thousand years.
A collective gasp: a wave, carrying a collection of cars like toys, hits the art-block. The roof collapses. The figure, crushed between two cars, disappears under the water. Akiko’s pursed lips soften.

At 14:46 Japan Standard Time on Friday 11th March 2011, a magnitude 9.0 earthquake struck the North-East coast of Japan. It was the most powerful earthquake ever to hit Japan, and the fifth most powerful earthquake in history. The force of the earthquake moved the main island of Japan 2.4 m east, altered the axis of the Earth, and produced soundwaves detected by orbiting satellites. Despite this, the earthquake caused relatively little damage. However, the resulting tsunami travelled up to 10km inland in some areas and devastated entire towns. The death toll was over 15,000. 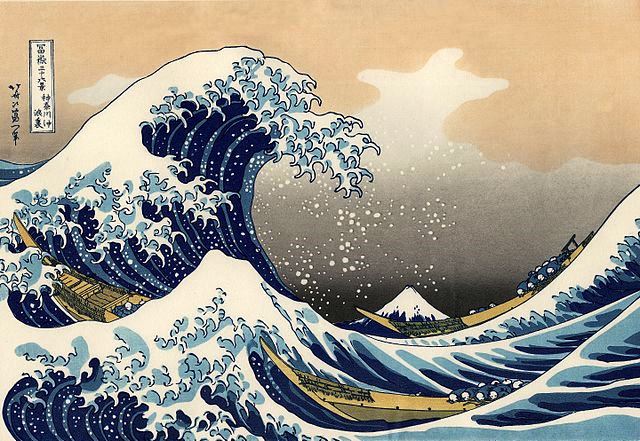 Roman James Hoffman was born in a small industrial town in the Black Country, England. He moved to London in 2004 and since then has been lucky enough to live in China in 2007 and Japan in 2012. He is currently satisfied living in South London. His writing explores identity, consciousness, sexuality, and morality in a challenging and confrontational way, often employing brutality and beauty in equal measure. In addition, he tries to maintain a social media presence through a blog and a facebook page.

(Next story: Don’t Shake Hands on the Bandstand by Jenn Stroud Rossmann)

OR submit something for our special BAD SEX issue

[Picture by the mighty Katsushika Hokusai]