Knowing how an unscrupulous tenant could blight one’s life, Mrs Bravington considered herself fortunate to have Mr Dullett lodging beneath her roof. Of course, she could never be certain of his financial standing, but in all their dealings, Mr Dullett had conducted himself in a manner that suggested a man of resilient means.

He was polite, paid his rent on time, and on the rare occasions when asked, had even paid early.

So when, on the last day of the year, he handed her his rent with the words, “it’s a little short I’m afraid,” she wasn’t particularly concerned.

Remaining defined by the lawful agreement between them, Mr Dullett had never allowed their relationship to develop into any type of friendship.

So Mrs Bravington was surprised when, one morning, he plucked a glossy periodical from his coat pocket.

“Look,” he said, pounding a picture of Laura Flinturt still flushed from her success in the world freedive championships, “you two could be twins.”

“Well, that’s… uh… Mr Dullett, would you mind if we discussed your….”

“Twins” he repeated, pinching her lips like a cymbal.

And again, a month later, after handing her one crumpled bill, with his sincerest regrets, he bombarded her with such flummery, Mrs Bravington wondered if he hadn’t mistaken her for death’s blue-eyed mistress herself.

Although flattered, it saddened Mrs Bravington that her appearance had become indicative of Mr Dullett’s financial woes. However, she could almost forgive him his glibness, if it weren’t for his increasingly capricious behaviour; the moment she accepted his apologies, Mr Dullett would change.

“Why should I pay to stay in this dog bowl?” he would say, and later, “my room is damper than a cat’s nappy, there are insects in my ears and this cough will cut me clean in half. Why oh why do I stay?”

Day by day, Mrs Bravington watched him change, and not for the better. He no longer bothered to shave, his shoes were clubbed with mud and when he passed her, she smelt the throat-slicing medley of dried sweat and excrement.

When, at dinner, Mrs Bravington suggested he might benefit from a bath, he flew from the room, leaving his dinner untouched, and disappeared upstairs.

Returning later from her Corkadoo class, she found him filling the bath with bleach.

“What are you doing?” she asked.

“Dealing with the smell, Mrs Bravington. You should be happy.”

He slammed the door in her face and she listened as he submerged himself in the fiery liquid.

The next morning, cleaning the top floor, she found brown sock prints leading from the toilet to Mr Dullett’s room. When she confronted him, he swore to never use the toilet again. She thought no more of it, until entering the kitchen the next morning, she found him squatting in the cat litter tray.

“Excuse me,” she whispered, retracing her steps.

Seeking answers, she waited until he’d left for work and let herself into his room. She found the floor littered with torn business cards and piecing one together, read the words, ‘Proportionate Client Services‘.

She noticed lemonade bottles lined along the skirting board and, opening one, was disgusted to find it filled with piss. Wiping her hands, she was confused to see the television was on, silently tuned to white static. She somehow resisted the urge to turn it off, smoothed down the bed and crept from the room.

This feeling persisted until, serving dinner, she noticed something that gave her hope. Mrs Bravington had always assumed Mr Dullett had no interest in religion. So when, sitting opposite him, she recognised his smile, the same smile she saw on the faces of the most zealous members of her church, she felt her spirits lift.

“Are you saved?” she asked.

“It is corporate, it is godless, and it has filled me with lead.”

Dismayed by his answer, she told him she found new-fangled religions counterfeit.

“Whatever!” he roared, and hurried away

Later, returning home early from a production of ‘The Bomb Maker has Toothache’ at the town hall, she found him in the shed, ribboned in leather and bowed before gods so archaic, his tongue bled from attempting to utter their names.

“Happy now?” he snarled over his shoulder.

Sick of it all, Mrs Bravington leashed her dogs and headed out to Willow Beach. The air was sharp and cold and seemed like sparkling water compared to the soup she shared with Dullett.

Up ahead, she noticed a crowd gathered at the water’s edge. When she got closer she saw black shapes stretched out on the sand.

Her dogs ran ahead, excited by these strange, new rocks.

She approached a woman kneeling beside one of them.

“Why has this happened?” Mrs Bravington asked.

“It’s the squid,” replied the woman, sobbing. “They lure them to shore.”

“But why, why would they do that?”

“I’m so very sorry,” said Mrs Bravington and, seeing the woman go limp, took her in her arms.

As she held her, she looked out to sea, imagining posses of squid pumping like shotguns, firing gargled yahoo’s as they watched their prey roll across sand for the last time. 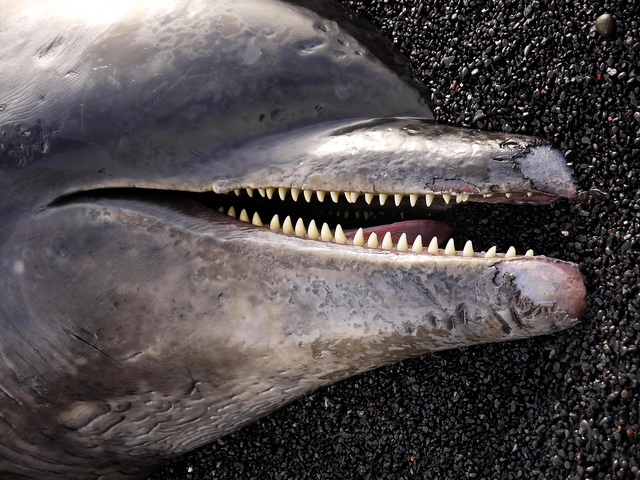 GJ Hart currently lives and works in Brixton, London and has stories published or upcoming in The Harpoon Review, Scrutiny Journal, The Legendary, The Eunoia Review, Sicklit Magazine, Near To The Knuckle, Spelk Fiction, Foliate Oak and others. GJ can be found arguing with himself over @gj_hart.

Also by GJ Hart A Kind of Kind Thing to Do

(Next story: The Hug by Kevin Tosca)