I’m five feet, blond, super-curvaceous. An unknown writer living in Washington Heights. Pretty! He’s a tall man, a manly man. A famous actor with a beauteous beak of a nose, Dick Tracy jawline, thick head of hair in need of my talented fingers. He’s Chris Noth, star of TV programs that repeat and repeat until I can’t get Noth out of my head. My heart. Other parts I’m too classy to mention.

Chris dated models. I’m no model. I couldn’t grow taller, but I could lose weight. And I did. Lose weight.

Then I wrote an in-depth analysis of his major TV roles, from Detective Mike Logan on Law & Order to Mr. Big on Sex and the City, to Detective Mike Logan on Law & Order: Criminal Intent, to Peter Florrick on The Good Wife. I wrote it on spec for TV Guide. They grabbed it, because, through deep, personal connections I didn’t have until I forged them in my imagination, I snared an interview with Chris.

Mr. Gorgeous and I produced sparkling conversation for hours even after the interview had been completed. He’d been kind enough to meet me in my “upstate” Manhattan neighborhood, at La Reina de Bistec on upper Broadway. As he also has an abiding fondness for platanos maduras (he confided during our meeting), I knew I would see him again.

Chris was unable to get together that second time, but left a coy note with the manager of La Cabaña Dominiciana, where we were to enjoy our “follow-up interview.”

He had not forgotten me.

Over the next few weeks he left little post-its for me at various Dominican restaurants in the Heights. Chris never told me where I could find them, but I always did. One night Chris visited me during REM stage. I know he had eighteen trysts with a prostitute — no, Peter Florrick did that — but he still gives me shivers. He is imposing and charismatic. Somehow, by the end of one dream, not only had we exchanged sly looks, but I ended up wearing his briefs, Chris Noth-redolent and warm. When I woke up I felt dirty, excited, and guilty. What more could a woman want? I appreciated the attention, as well as his low-tech methods of communication. Yet, like Mr. Big, he was noncommittal.

Detective Sexy continued to pop up in my dreams.

Early one Sunday I opened my eyes to the horrific truth ─ fueled by an IMDb update ─ that Chris Noth is married, and, in fact, a father!

Thank God. Or the Heavens. Or whoever writes Internet Movie Database. Because I have my own man. I love him.  I do.  And, frankly, I wasn’t looking forward to leaving him for a guy like Peter Florrick or Mr. Big or even Detective Mike Logan. Plus it’s been murder trying to lose these last ten pounds. 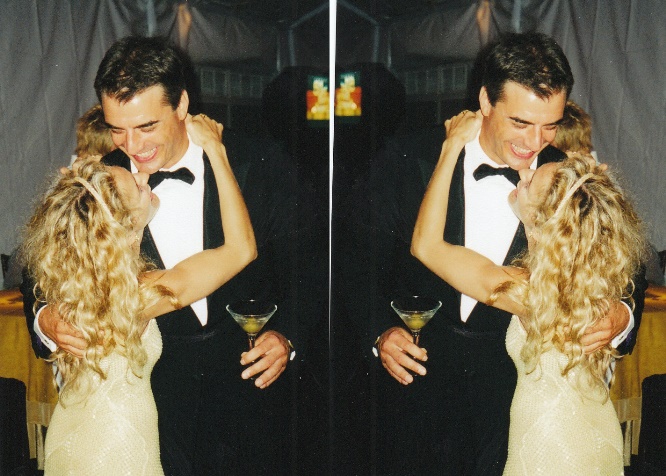 (Next story: In Which Woody Allen Goes For a Pedicure by Jennifer Fliss)