In Which Jabba the Hutt Stops By For a Coffee

“Ho, ho, ho, ho,” he intoned, dipping his slug arm into the aquarium housing my rare Australian flathead perch. The striped fish flipped in his chubby fingers as he lifted it into his maw. As always, there was a certain balletic grace in the way he fed himself.

“Your excellency,” I said, handing him a cup and saucer with coffee.

One of the pig guards took offence and lunged with his blaster-spear, but Jabba shouted him down. He knocked an arm hard against his head, making the guard squeal and fall back against the fireplace.

He took the coffee cup and saucer, and we sat for a while. It was like this every time: just sitting and drinking in the front room, no discussion, unless he had a translator, which he didn’t this visit. I sensed a degree of melancholy in the way he sipped at the coffee. This wasn’t the gregarious Jabba I knew. And where was his slave-girl anyway? He usually had one roped and full of jitters by his side. The slave-girl typically added some energy to the proceedings.

He fished around again in the tank, his bloated hand finding only ornaments – a sunken ship and decorative coral. This seemed to deflate him further. He left his arm in the water for a second or two. His huge grey eyelids fluttered, momentarily. The other guard grunted, concerned for his master’s health – Jabba awoke suddenly to this insinuation and struck him across his snout. He screamed at the guard, almost high-pitched. Both guards cowered by the fireplace – their coffees, of course, untouched.

I imagine the guards were getting quite warm by the fire.

I motioned to the TV set. “Your Excellency, Jabba. Most beloved master. Do you mind? The match?”

Jabba stared at the TV screen, his arms now folded over his grey girth. One half of his trunk was perched atop my best sofa. His other half had crushed the mid-century coffee table I had intended to use for serving the coffees. He looked sad, and a bit confused.

On the screen, tiny football players kicked and ran around a field so green I can only wonder at Jabba’s thoughts.

It was still nil-nil; nobody had been killed on the field.

Explaining the offside rule, without translation, was what I feared most. 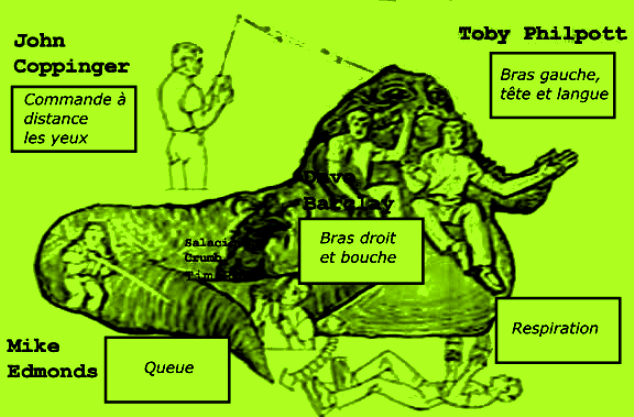 Jonathan Cardew is a writer and editor based in Milwaukee, Wisconsin. His short [and very short] stories appear or are forthcoming in Atticus Review, Blink Ink Quarterly, Flash: The International Short-Short Story Magazine, Flash Frontier, KYSO Flash, Micro Fiction Monday, Segue, and Spelk, among others. He teaches writing at Milwaukee Area Technical College, where he co-edits The Phoenix Magazine. He is from a city in the north of England, known for its moustache spoon. He blogs here: https://jonathancardew.wordpress.com/

(Next story: Louis by Martin Heavisides)

(Picture derived from an image by Toby Philpott)