Where I worked as dishwasher, there was a strict hierarchy. When orders were called, the line cooks had to answer, “Oui, Chef!” You didn’t call them line cooks to their faces; they all had gussied-up titles like poisonnier (which sounded like poison to me) and saucier (except Riba with the mole on her nose was nowhere near saucy), and even ImyselfKanye had a fancy title — plongeur. A plonk and a jeer, this fitted in aptly with what I did all day, scraping expensive food leftovers into a compost bin. Gained me an expansive vocabulary, without wanting to; learned that one crayfish I was scraping into a bin could cost $10; to think I’d never heard a lick of French before Escoffier entered my life; the executive chef Pierre Savoyard was the one to learn it me.

Him with his newfound airs and tude and swagga… he from the same hood — Bushwick; the entire kitchen staff were hoodrats from the five boroughs, but push them through a two-star Michelin, this what you get; homies who mispronounce their French and sometimes the barrio creep through in accents and word choices; we can’t escape history, we all in a time lock, history is a weapon. Malcolm X.

The way I was going to survive Poison was simply to steer clear, swivel, dance a two-step. Let the fucker put chilli peppers in my meal portion, stick mossy socks in my basement locker, shit-stain my starched chef-whites, these were but playground frolics. So long as he don’t pull no gat on me, Kanye will survive another hiss-and-rattle of the hot water hose.

Until the day everything went topsy-turvy. Office intercom above the kitchen buzzed — special VVIP table. VIPs came in everyday, ain’t no biggie, but VVIPs were different; where they walk, the pavement gleams with gold. Big Chef took over the amuse-bouche station to make a special one-off. Big Chef hustled over to Garde-Manger, actually elbowed the bro aside to make the asparagus with shaved truffles & truffle oil vinaigrette. Price tag: $52.

Poison ducked his head just below the open-hatch. Chortling, he sidled over; ey, you know who out there? your doppelgänger, or is you the doppel and he the ganger? Poison smacked everything in sight — his own thigh, Riba’s passing butt and got a glareful, my midriff. Hot water scalded up and down my arm.

Kanye West, dudes! The chefs-de-partie altogether busted out the rhymes — the sun in my eyes, whoo… sashaying this way and that, bumped hips and bounced, bounced. Verbiage floating out the hatch like that, guess who came backstage to pay us a visit. Mr. West! The Entremetier tried to give him the black man handshake, but Kanye having none of that. I heard you singing my song. He flashed them pearlys; what kinda music you listening back here? This was shameful, cos just then the blaster was blasting some sonorous classical shit. Kanye West looked Big Chef in the eye, then he looked down. What’s that? Big Chef shook the knobbly — worth a few thousand greenbacks at least — this, this mon cher is the truffle.

The Truffle? I like The Truffle. Kanye nodding his head. Even his nodding got rhythm.

Big Chef shaved The Truffle. A one a two.

Kanye was unimpressed. That’s it? Yo, shave that bitch’

Kanye clapped. You got Kanye in da house?

Poison stepped up. You mean this guy? He pointed down from atop my head, sniggered. Kanye swiveled. Looked at Poison, looked at me. Who dis squirrel — he tipped his chin at Poison. A snake-shiver of sniggers across the floor.

Kanye West was unimpressed. Now his gaze was a thunderbolt; his mouth opened slightly. Play my music, he ordered. Play my music while I eat this asparagus with finely shaved truffles. Snapped his heels round; turned his head sideways; barked. Kanye, you a brave man, I like that. I like your sense of humour. Kanye the man and Kanye the cat, shaking his head as he walked out. The brigade whooped, threw their rags and tongs up in the air. In the dining room, they somehow finagled some Kanye (one of the waitresses had it on her ipod) and blasted out RunawayHeartlessBeautifulAlloftheLights. Big Chef toed rapidly after. The sound waves and punctuated jabberin was making the dining room tremble.

Poison kicked me in the ankle. Hard. His teeth glimmered. Eyes danced with fire. Snap, he said, you acting like you seen Yesus. Slowly smeared his greasy spatula on my chest. Suck up yer drool, pussy.

I faced him. In the kitchen hierarchy, he was several rungs higher. It don’t do to piss him off. I still gotta work here. Kitchens have knives. Life could end up being a real bitch. But seeing Kanye walk in, Kanye talking to me, Kanye mentioning my cat — it ain’t everyday that goes cray like that. So.

I flipped him the bird. Kiss my ass. He called me brave and you squirrel. 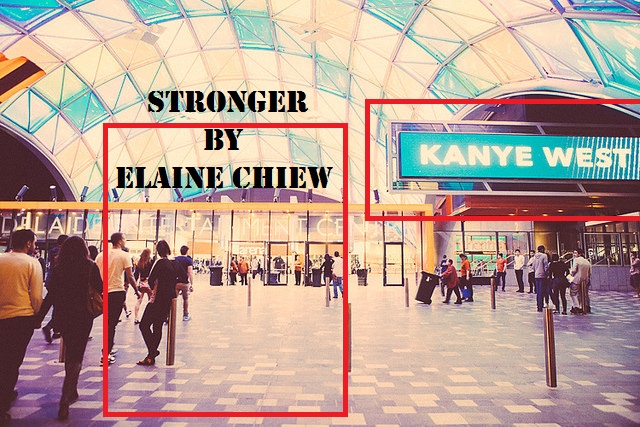 Elaine Chiew is a London-based writer, and her fiction has appeared in numerous publications and journals, including, most recently, JMWW, The Squalor Review and The Ilanot Review. She is the editor and organizer of Cooked Up: Food Fiction From Around the World (New Internationalist 2015).

Also by Elaine Chiew The Boat / A Compendium of Chinese Ghosts, Part I and II / Virtually, Yours: Reality

(Next story: Dusty Hoffman Isn’t Greek by Beverly A. Jackson)