It was a cool overcast morning, threatening to rain, so I had my blue hoody on as I sat on the top step of the front steps that lead up to my apartment building. With a mug of freshly-brewed coffee in my hands, my still-sleepy eyes blurrily registered cars as they passed by on the street. I saw colors rather than details, red blobs, white blobs, black blobs, etc., depending on the car.

I took another sip of coffee. Cars continued to pass on the street. Soon a metro bus roared by, before coming to a stop at the bus stop near the end of the block. The bus’s brakes hissed and offended my ears as they always did, and I did the thing I always do with my ears whenever I hear an obnoxiously loud sound to sort of mute the sound out some.

A minute later I saw this guy who’d apparently gotten off the bus walking down the sidewalk on my side of the street, this tall skinny guy, sort of scruffy-looking but not too scruffy-looking, sort of a groomed-scruffy look, like a lot of the youngsters go for these days, and I noticed as this guy came closer that he was wearing a blue hoody like me, and I strained my eyes to get a better look at him before concluding with shock followed by something like horror that his blue hoody might very well have been identical to my blue hoody.

Just as he was passing directly in front of me on the sidewalk he looked my way, then nodded almost imperceptibly the way smart, insightful people, or people trying to appear smart and insightful, are prone to nod at others. Then he stopped.

I just stared at him. I wanted him to know that I was wearing the hoody before he was. That he was copying me and not the other way around. I’ve always hated looking like others. It’s one of my big pet peeves, along with slow drivers.

I set my coffee mug on the ground so that my hands were free after he’d walked off and then I wrestled out of my blue hoody, bunched it into a ball and sat on it like it was a seat cushion.

He was the first person I’d seen wearing the same blue hoody as me, but a week later I saw another person wearing the hoody, and a few days after that another. It wasn’t your run-of-the-mill hoody from Target or Costco or wherever – I’d found mine at Value Village. It was in a league of its own as far as hoodies went, which was why I liked it so much. It had uniquely-placed zipper pockets, also ribbing, I think it’s called, over where a person’s ribcage would be, these horizontal lines that, along with the pockets, lent the hoody (in my opinion) an urban, sort of street-tough feel. I often felt like a badass when I wore the hoody, it was true. But now that other people were wearing it, now that it was gaining popularity, I traded the hoody at Value Village and scoured the racks for something new. 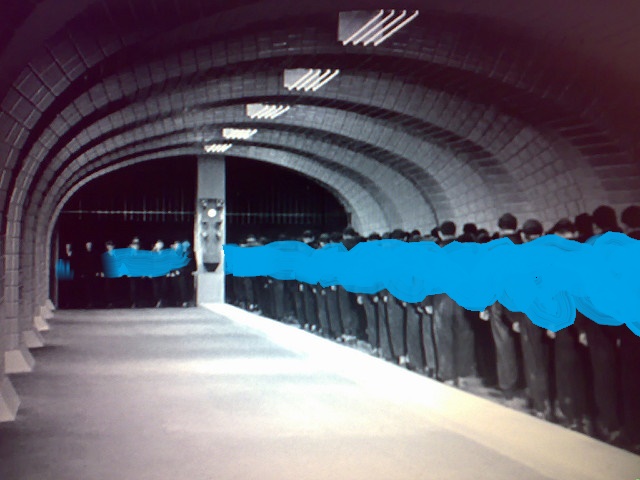 T. E. Cowell lives in Washington State and his webpage is tecowell4.wordpress.com should anyone want to look him up.

(Next story: Driftwood by Chris Milam)

(Previous story: No Problem, No Problem by Lori Sambol Brody)

[Picture derived from this]