Narrator: A life squandered. This is how most of Alan Champ’s family members and loved ones would likely have described the poet’s life at its close. An endless string of jobs, arrests, drunken fights, failures, and disappointments comprised Champ’s life, but through all of this, the young man was secretly writing a literature that would captivate the world after his passing. This is the life of the poet Alan Champ.

Interior: Fade in on a hospital room, empty other than a lifeless body in the bed and a nurse unhooking equipment. Cut scene to the emergency room. Doctors, nurses, an apiary of total and hectic individual rapture. They are trying to save Alan Champ’s life.

A light comes on, shifts into the distance and comes again in front and behind his eyes. He was sleeping, he says. He was only sleeping. The men and woman standing over him, their faces are long and studied, and the light is all above him, just in front of the ceiling tiles, twin tiles like the tiles at M.C. Peterson Elementary School, pure and white but lined with asbestos, a hidden rabbit deathmarch like the one inside his chest, just beneath the cigarette scars.

Narrator: On April 21, 2010, Alan Champ, born Alan Christopher Champon, died in Williamson, West Virginia, from a self-inflicted gunshot wound to the heart. He was thirty-four years old and had just finished what some, only four short years later, would come to refer to as his generation’s most profound poetic contribution to American letters. But on the morning of April 21, no one knew he had finished anything in the total sum of his life.

Interior: M.C. Peterson Elementary School, Long Hook, Kentucky. Breakfast in the school cafeteria. Milk in the carton, orange juice in the carton, scrambled eggs, fatty bacon, and jelly. Jelly most of all. Young Champ eats alone at the table farthest away from any places groups of children have gathered together. Just before breakfast time is over, he feels something hit and land on the side of his head. He feels and brings his fingers away to find them coated in jelly. Again, he examines the side of his head and this time brings away a clump of grape jelly. As it does, he hears the snickers from the other kids. We follow him through the rest of the school day as he agonizes about the jelly stuck in his hair, wondering if everyone is staring at him, laughing. It never once occurs to him to visit the office and call home.

The first day at M.C. Peterson was like the first day of his life, and he thinks about it now with the serious people standing around him, forcing a chewable tablet into his mouth that gets crushed in a cavitied tooth. The days seemed always pleasant then, the weather living easy in the world. The weather inside him, like now, was a forever crying gray.

Narrator: Champ showed few signs of a budding literary career during grade school and junior high, aside from a teacher occasionally giving him a book to read after noticing he seemed to enjoy the activity. But as we now know, he was writing. Poem after poem after poem, so that by the time he entered college and enrolled in his first creative writing course, his instructor would have been surprised to learn Champ had more than one-thousand pages of original work, work he never allowed the first person to read. This work, a mammoth poetry collection the world over knows as The Pinpoint Blade Inside Me, would remain unseen until its publication two years after his death.

Exterior: Taylor Books, Charleston, West Virginia. The window front as seen from the sidewalk is lined with copies of The Pinpoint Blade Inside Me. The cover is a picture of the poet himself, in need of a haircut, his mustache worn in the Old West style. Behind him is a church with several people exiting. They all seem to be looking at Champ, his shoulder turned as if ready to walk away, out of frame.

Narrator: Alan Christopher Champon redefined both poetry and what it meant to be a poet. His legacy was born the afternoon of his death. The poet Donald Hall said of Champ, “If ever an attempt to truthfully chronicle a single life has been successful, it has been with Alan Champ’s body of work. His honesty and talent are signposts not only for those of us still working to express ourselves in verse, but should, if justice could prevail at all, work retrospectively for all poetry ever penned. He is forever Moses, and we must follow.”

Interior: A room not dark but dim. It’s raining and has rained for several days. The poet’s mouth is drawn in a seizing cramp. He looks like he might be whistling for someone to notice. His fingers are drawn inward toward the palms of his hands. He can’t stop sucking large breaths and struggles to hold a pencil between two clawed fingers. The words are there, still there, but he can only guess at what’s to come. It has always been this way.

He hears them ask if he’s ready to go or if he needs to vomit again. The choices are offered like clean water or rotted meat, an obviousness lost in the breathing. The faces are panicked now and his heart has already stopped twice and the room is leaving and the light is shifting and the beginning of his life is above him in the asbestos and he is ready if he could speak and he is ready to lead them all away. 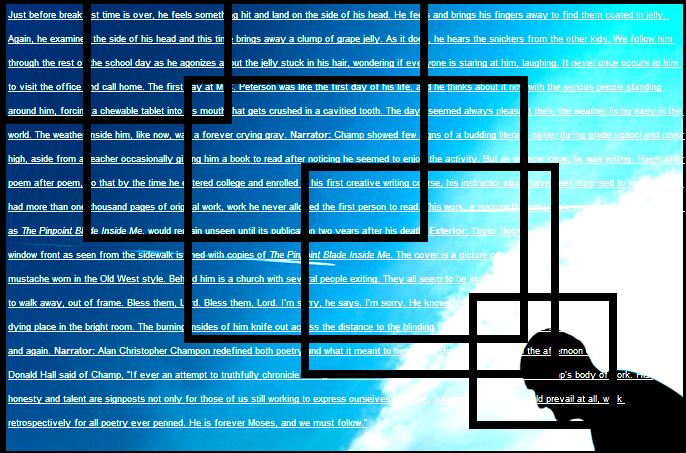 Sheldon Lee Compton is a short story writer and novelist living in Kentucky. He is the author of the story collections The Same Terrible Storm and Where Alligators Sleep. Visit him here.

(Previous story: The House Between Time Zones by Kyle Hemmings)